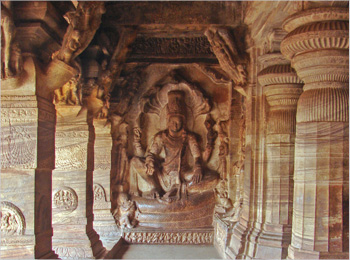 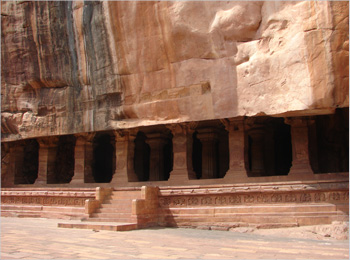 The first cave of the chief cave, dedicated to Lord Shiva is known to be built in 578 A.D.. On climbing 40 steps the cave can be reached. This Cave has about 81 sculptures of lord Shiva, in the Nataraj form bearing 18 hands. Made out in Red sandstone, the cave has an open verandah, a hall with numerous columns and a sanctum. The ceilings and pillars are decorated with paintings of amorous couples.

The second cave can be seen at the pinnacle of a sandstone hill. This Cave Temple is dedicated to Lord Vishnu, the preserver of the Universe as per the Hindu beliefs. Here, Lord Vishnu is presented in the form of a 'Trivikrama' (dwarf) where his one foot is authoritative of the Earth and with the other he is mastering the sky.

Balanced on the hill, the third Cave Temple traces its origin in 578 A.D. The front elevation of the cave is approximately 70 ft wide. The platform is carved with the images of 'ganas'. The structure of the temple rejuvenates the memoirs of Deccan style of architecture. This temple is a fine example of the artistic quality and sculptural genius. The sculpture of Lord Vishnu in the company of a serpent captures the major attention. Here, Lord Vishnu is represented in his various incarnations including Narsimha, Varaha, Harihara (Shiva-Vishnu) and Trivikarma.

The fourth Cave Temple is credited for being dedicated to the Lord Mahavira, the 24th Tirthankara of the Jains. The cave is the latest among all the four caves. It finds its origin in the 7th century, near about 100 years after the construction of earlier three caves. In this shrine, Lord Mahavir is in the sitting position.

The artistic quality and sculptural grandeur mark the very sight of these cave temples at Badami. The rich traditions of India are depicted through these monuments of heritage. People from all over the World come to visit these shrines of architectural radiance and religious significance.

The Badami cave temples dates back to 600 and 700 CE. The architecture also has structures built in Nagara and Dravidian Styles, as adopted by the Chalukyas. An Important part of the historical heritage at Badami cave temples are the Kannada script inscriptions. There is also the fifth natural cave temple in Badami, which is a Buddhist temple. It is entered by crawling on all fours. 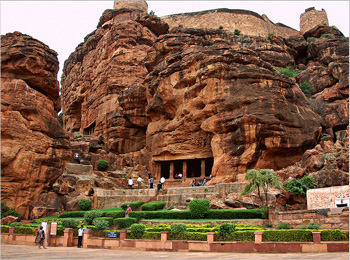 The cave is dedicated to Lord Shiva and has 81 sculptures of Lord Shiva in the form of Nataraj, with 18 arms. The second cave is dedicated to God Vishnu the preserver of the universe as per Hindu beliefs. Here, God Vishnu is presented in the form of ‘Trivikrama’ (Dwarf), where his one foot commands the earth and the other masters the sky. In the shrine of Mahavira, the god graces his devotees in a seated posture. 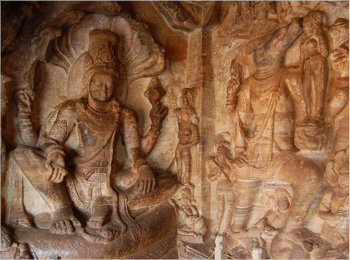 The past of Badami is closely related with the ancient Kingdom of Chalukyas. It was first founded by Pulakesin I in the 6th century A.D. The Chalukyas are to be credited with pioneering a new architectural style, examples of which can be seen in Aihole, Pattadakal (one comes across Banashankari, the goddess the village is named after) and other neighbouring areas. It was also ruled by the Chalukyas of Kalyan (a separate branch of Chalukyas), the Kalachuryas, Yadavas of Devangiri and the Vijaynagar Empire. In the latter medieval period, Adil Shahi rulers of Bijapur and the Marathas ruled it. Badami was finally taken over by the British, who made it a part of the erstwhile Bombay Presidency. They built a number of temples,and other monuments that marked the beginning of the Hindu style of architecture.This new style combined the best of two distinct styles - the North Indian, Indo-Aryan Nagara style and the South Indian Dravidian style. Known as the Chalukyan style, this style is manifested in many cave temples, dedicated to Brahmanical deities, as well as the many Buddhist and Jain monasteries in the region.

This temple is dedicated to Lord Bhoothanatha,(Shiva), built with sand stone and is located in the banks of Agastya Lake. The temple complex also depicts fine carvings of Jain figures and avatars of Lord Vishnu.

This temple is dedicated to Lord Shiva and is located few kilometres from Badami,. Built in Badami Chalukya style of architecture, this temple is important for the two inscriptions, one is the Pillar inscription and the other is the Porch inscription; these inscriptions narrate the history of the Chalukya dynasty.

Located at Godachi, a village of the Belgaum district, this temple is dedicated to Lord Veerabhadra. A fusion of Chalukya and Vijaynagara architectural style, the site is known for the Godachi Jatra fair, held during November- December, the Hindu month of Karthik.

Located at the Bagalkot district, this temple is dedicated to Goddess Parvati. Built in the Dravidian style of architecture, the temple exhibits the unique deity with eight arms, seated on a lion while the defeated demon lies at her feet.

It is one of the early Chalukyan temples dedicated to Lord Shiva, and is located 10 Kms, in a forest on the way to Mahakuta,

46 Kms. There is a remarkable group of temples here built during the reign of Chalukyan rulers, dating from the sixth to the eighth centuries.

Take a dip in this green tranquil lake. It is said to have healing properties. According to a popular story, King Kushataraya was cured of leprosy here.

Museum with Shiva's bull, "Nandi" at its entrance overlooking the dammed lake is worthwhile for the scholarly. This museum is closed on Fridays.

Badami Fort is 2 Kms away from the caves and is strategically situated on top of the hill, the fort encloses large granaries, a treasury impressive temples on top of the northern end of the hill. Malegitti Shivalaya, perhaps the oldest temple of the lot, is dedicated to the benign aspect of Shiva as the garland maker. Placed on the summit of a rocky hill, the temple is built of stone, finely joined without mortar, & with Dravidian tower. The lower Shivalaya has a Dravidian tower of which only the sanctum remains now.

There are two airports located near Badami. The nearest airport to Badami is located at Hubli, Karnataka, which is 106 km from the city. The other airport is Belgaum, which is at 150 km from the city. These airports are connected to the international airport of Bangalore and Mumbai. There are taxis and bus available at the airport which directly can take you to Badami.

Badami is directly connected to Hubli, Dharwad, Belgaum, Bangalore, Bagalkot, Hampi and Bijapur via road. While Pune is at 470 km from Badami, Bangalore is at 464 km and Hyderabad at 420 km. Besides private and government buses, tourists can avail taxis to reach the Badami Cave Temples. Visitors can enjoy unique tonga rides (horse driven vehicles) from the bus stand to the temple complex, while the auto rickshaws are faster mode of communication within the city.