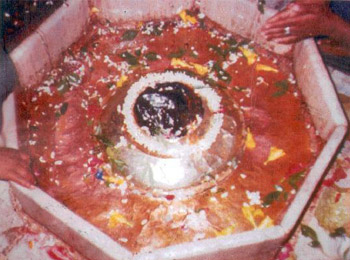 The temple of Baba Garibnath, devoted to Lord Shiva is situated in Muzaffarpur in the state of Bihar, India. Baba Garibnath Temple is also commonly addressed as the second Baidyanath. According to the Sthala purana, it is said that at the place where the Sanctum Santorum is currently now, there had been a banyan tree. The person owning the place attempted to remove the tree by cutting it. While in the process of cutting the tree, he found a Shivalinga inside. On the same night Lord Shiva came in his dream and asked him to build a temple for Baba Gabrinath, in the place where the banyan tree had stood earlier.

The temple of Baba Garibnath is located in the town of Muzaffarpur, is unquestionably one of the most celebrated temple of Lord Shiva. The founder of the temple, had discovered the Shiva Linga under the banyan tree, while in the process of cutting it. Unknowingly, while cutting the tree, the tool used in cutting the tree, had accidently hit the Shiva Linga hidden inside the tree. The Linga got damages partially due to the swing of the axe, and a red colour liquid started seeping out of it. The land owner was pretty concerned after viewing this and had a disturber sleep that night. “Baba Garibnath” came in his dreams and identified as Baba Garibnath-one who has great compassion for poor. He ordered the owner to build a temple, install the “Shivling” at the same place and call one of his great Devotees “Shri Shivdhari Pathak” of Chapra district to conduct the pooja and take care of the temple on a regular basis. The order was completely followed as told by “Baba” and since that day “Baba Garibnath Temple” is famous for fulfilling the wishes of its devotees. It is also called second “Baidhnath”.

How to Reach Baba Garibnath Temple

The Nearest Bus stop is Muzaffarpur.

The Nearest Airport is Patna airport.