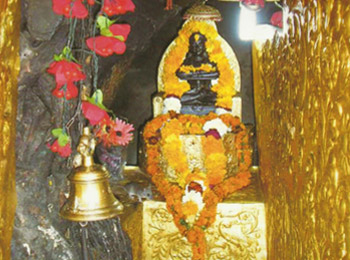 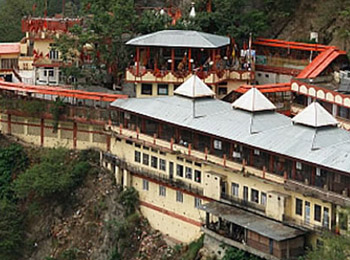 The Baba Balak Nath Temple is situated at the village of "Chakmoh" in the district of Hamirpur on the hilltop, in a natural cave carved in the hills, considered to be the abode of Baba. An Idol of Baba is placed in the cave. Babal Balak Nath is a Hindu deity worshipped in the northern Indian states of Himachal Pradesh and Punjab. He has a large number of followers in Delhi also. His main temple is in Hamirpur, Himachal Pradesh. The base city is known as Shahtalai. His temple is very big and women are not allowed to enter the main garbagriha because he was a Brahmachari and could not have any women near him. There is a different way to seek blessings from the same idol but at a distance. Many people with their desires come to this temple. Baba Balak Nath is the son of lord Shiva. 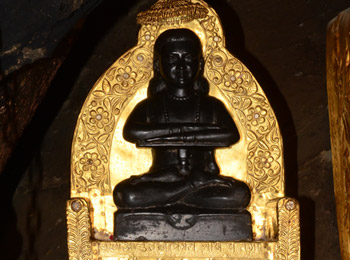 Baba Balak Nath is believed to be a re-incarnation of Lord Kartikeya, son of Lord Shiva and Goddess Parvati, born in Sat-Yuga to annihilate demon Tarkasur.

The most popular story about the birth of Baba Balak Nath as 'sidh-purush' is associated with the Amar Katha of Lord Shiva. It is said that Lord Shiva was sharing the Amar Katha with Goddess Parwati in the cave of Amarnath, and Goddess Parvati fell asleep.. A kid-parrot was there in the cave and he was listening the entire story and was making noise of 'yes' ("hmm.."). When the story finished, Lord Shiva found Goddess Parwati sleeping and so he understood that someone else had heard the story. He became very angry and threw his Trishul on the kid-parrot. The kid-parrot escaped from there to save his life and Trishul followed him. In the way, the wife of Rishi Vyas was yawning. The kid-parrot entered her stomach through her mouth. The Trishul stopped, as it was unreligious to kill a lady. When Lord Shiva knew all this he also came there and narrated his problem to Rishi Vyas. Rishi Vyas told him that he should wait there and as the kid-parrot would come out, he could kill him. Lord Shiva stood there for a very long time but the kid-parrot did not come out. As Lord Shiva stood there, the whole universe got disordered. Then all the Lords met Sage Narada and requested him to request Lord Shiva to save the world. Then Narada came to Lord Shiva and prayed him to leave his anger as the child had already heard the Amar Katha, and so now he had become immortal and now nobody could kill him. Listening to this, Lord Shiva told the kid-parrot to come out and in return the kid-parrot demanded a blessing from him. Lord Shiva accepted that and the kid-parrot prayed that as he comes out as a man, any other child who gets birth at the same time would be granted all kind of knowledge and would be immortal. As Lord Shiva accepted this, divine babies come out from the mouth of Rishi Vyas. He prayed Lord Shiva and got his blessings. This divine baby was called Sukhdev Muni later. The other babies who got birth at that time were famous as Nau Nath and Chaurasi Sidh. One of them was Baba Balak Nath.

Chaiter Mela Shri Sidh Baba Balak Nath Ji is a day and night festival and gives opportunity to worship Divine Goddess. The festival of Chaitra Mela Shri Sidh Baba Balak Nath Ji is celebrated every year from 14 March to 13 April. Vasant Panchami. Dedicated to Goddess Saraswati, Vasant Panchami spreads yellow color all around. Goddess is dressed in yellow and worshipped with Puja and Yajna. People wear yellow clothes and share yellow sweets with their friends and relatives. Maha Shivratri is also known as Great Night of Lord Shiva, Maha Shivratri is dedicated to worship of Lord Shiva and Maa Parvati. Some people fast on this day while others celebrate it by reciting Shlokas and singing bhajans. The celebrations and worship continue till late night when devotees offer fruits, coconut, Ganga Jal and Bilva leaves to Lord and Goddess. The festival of Holi is to celebrate the triumph of good over evil. According to the legends, the demon Hiranyakaship wanted to kill his son Prahlada because he was a devotee of Lord Vishnu. So, the demon made a plan with his sister Holika to kill the son. Holika tried to kill Prahlada and sat with him in fire. She died in fire and Prahlada rescued. Ram Navami celebrates the birth of Seventh Avatar of Lord Vishnu; Shri Rama who was born on the 9th day of Chaitra month. Shri Ramchandra killed the evil king Ravana. The festival of Raksha Bandhan denotes and further strengthens the bond of brother and sister. Still celebrated in a traditional manner, sister ties Rakhi on wrist of her brother and expresses her love.

The nearest airport is Chandigarh and Gaggal (kangara) situated in Himachal Pradesh. Daily flights are available from New Delhi and Mumbai. The approximate distance by road between Chandigarh airport and Deot Sidh is 186 km.

The Nearest railway station is Una which is approx. 65km from Deot Sidh.

The approximate distance between Chandigarh and Deot Sidh is 186 km by road.