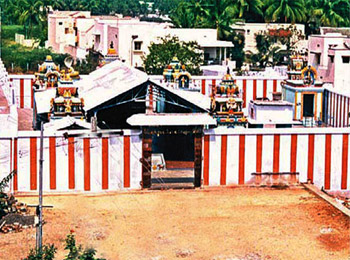 The Ayyappan temple is dedicated to Lord Ayyappa and is located at Gobichettipalayam. The Samajan was founded in 1977. In 1987 special abishekas were performed on the kalasa. The sanctification of the temple took place in the year 2000 with all grandeur and elegance. Thrice a day Ghee abishekas that are performed on the deity, it is in turn distributed as Prasad to the devotees.

Those who suffer from speech impairment offer Special Poojas at Manjal Madha shrine. Lord Shiva and Muruga are shrined facing each other. To the left and right of the temple are present Lord Surya and Chandra and Ayyapa Mandapam.

Lord Ayyappa devotees visit this temple before starting their pilgrimage to sabarimala in the month of Karthigai and Margazhi. The packing of Irumudi is done here. There is a dedicated hall where irumudi is packed, near which there is a nagaraja shrine. There are shrines for Lord Ayyappa, Kasi Viswanathar and mother Visalakshi. Shrine of Manjal matha, who performed penance to marry Lord Ayyapa is popular in this temple. On all Thursdays, Veena Dakshinamurthi is worshipped as in Madurai Meenakshi Amman temple. The shrines of Shiva Durga, Chandikeswara and Kalabhairava are to the left.

Thirukarthikai in November-December and Panguni Uthiram in March-April are the festivals observed in this temple.

How To Reach Aiyappan Temple

Gobichettipalayam is an important place in Erode district. The temple is located on the Gobi-Satymangalam road near the Municipal arch.

The Nearest Airport is Coimbatore airport.