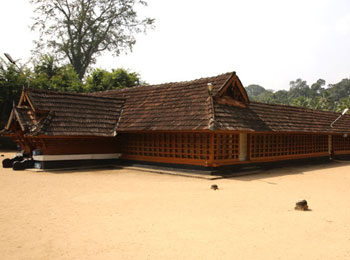 The Lord Ayyappa Temple at Kulathupuzha near Thenmala in Kollam District of Kerala is an important shrine visited by Ayyappa devotees especially during the Mandala-Makaravilaku season. This Shasta shrine is located on the banks of Kulathu Puzha, a tributary of Kallada River, and is in the reserve forest. The deity here is Manikantan or the child form of Lord Ayyappa.

Kulathupuzha Sastha Temple is located on the banks of river Kulathupuzha which is a tributary of Kallada River in Pathanapuram taluk of Kollam district. The presiding deity of this temple is lord Ayyappa who is in the form of Balasastha. It is one among the 108 holy Ayyappa Swamy shrines in Kerala. Lord Parashurama is believed to have installed the idol here. Lord ayyappa is seen here in both fierce mood (ugramoorthi) as well as auspicious mood (mangalapradayakan). Shiva, Yakshi, Vishnu, Ganapathi and Karuppaswami are the other deities present in the temple. It is said that the idol of Sri Sastha was founded by a Brahmin from Kottarakkara. The temple was initially under the control of Kottarakkara raja but later the administration of the temple was handed over to the Travancore devaswom board. The pond near to the temple is another important attraction. Devotees offer Meenoottu vazhipadu for healing the warts in the skin. All the devotees are so concerned about protecting the fishes in this pond, considering them as lord Ayyappa's favorite ones. Fishing is also strictly prohibited here. The tantric rights of the temple are held by Kokkalathu madam.

Lord Ayyappa is also called as Dharma Shasta. There are two main deities in this temple – Lord Shiva and Shasta. Shiva is in the form of Shiva Linga and that of Shasta or Ayyappa is a stone idol. There is also an idol of Lord Vishnu perfectly carved. The temple complex also consists of smaller shrines of Lord Ganesha and Devi Parvathi within it.

There is a fascinating legend behind the establishment of the Ayyappa Temple at Kulathupuzha. Once an elderly Brahmin who was returning from his Rameshwaram pilgrimage is said to have camped on the banks of river Kallada. His servants were looking out for stones to create the makeshift oven in order to prepare the dinner.

They found a stone fixed to the ground nearby. They brought two other stones to make an oven. But the fixed stone was bigger than the other two stones. So the servants placed two more stones on top of other to adjust the height. Suddenly, the first stone grew a bit taller. The poor servants raised the level of the two stones again but the fixed stone again grew a bit taller. This exercise of adjusting the height continued for a while.

Finally frustrated with the fixed stone, one of the servants hit the fixed stone with another stone. Suddenly blood gushed out of the fixed stone and the scared servants ran and reported the incident to the Brahmin. The Brahmin sprinkled the holy tirtha (sacred water) which he had brought from Rameshwaram , on the bleeding fixed stone. Soon, Lord Ayyappa appeared before them in the form of a child. The local chief came to know about this incident and decided to built a temple for Lord Ayyappa.