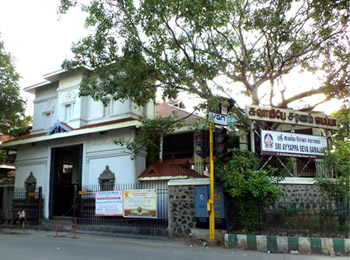 The Ayappan temple is located in Anna Nagar and is dedicated to God Ayyappan. He is an incarnation of Sastha who is considered to be the son of God Shiva and God Vishnu.

When Anna Nagar was developed as a model town in the late 1960s, the annual vilakku pooja during the mandala makaravilakku season was celebrated by Ayyappa devotees in the newly formed Shanti Colony. The residents' response to this annual celebration resulted in the formation of the Sri Ayyappa Seva Samajam (SASS) in 1976, with 14 members in its committee.

In 1979, the Samajam started a charitable medical centre for the poor and needy. The same year, a 7-ground land near the Visveswarayya Tower was allotted to the Samajam by the Tamil Nadu Housing Board for the construction of a temple, for which members contributed 38,000 towards initial payment. Initially, a makeshift temple was built in a thatched shed along with a charitable medical centre in another shed. Work on the construction of a permanent temple continued for the next five years in consultation with temple architect Kanipayyur Krishnan Namboodiri.

The construction was guided by P. N. Subramaniam, the founder-president, P. Chandrasekhara Menon, the second president, and P. V. Nair, and financial support was provided by R. Ratnam, then chairman of Sundaram Industries, and P. Velayudham. In May 1984, the typical Kerala-style temple was completed, conforming to the traditional shastraic stipulations. The kumbabishekam and consecration of the idol were performed on 13 May 1984 by temple Thantri Abli Krishna Vadhyan Namboodiri and K. M. Kesva Battatripad, former chief priest of the Sabarimala Temple. The panchaloka Ayyappan idol was made by Chenganur T. Rajarathinam. Idols of Ganesha, Subramanya, Goddess Durga, and Anjenaya were also consecrated.

Later, a Navagraha (the nine planets) shrine was added in the temple. In 1989, a unique architectural structure known as the Natamandapam with an imposing gopuram was added. In 2005, gold covering of the 22-paras (segments) dwajasthambam and 27 thazhikakudams with about 6 kg of gold was completed. A special kumbabishekam of the gold-covered dwajasthambam was performed on 20 June 2005.

The temple is built on a 40-cent land near the Visveswarayya Tower. The temple has shrines for Ganesha, Muruga, Durga, Anjaneya, Navagrahas and Nagaraja. The main sanctum of Lord Ayyappa faces west with Lord Ganesha and Lord Subramanya to the left and Goddess Durga to the right, all facing east. The Navagraha shrine is located on the southeast corner of the temple and the Anjaneya shrine is located in the southwest corner, facing east. The main door at the entrance is covered with brass plates. There is an auditorium, named after Sri Adisankara, covering about 3,600 sq ft, which can accommodate about 1,000 persons, for conducting spiritual and cultural programmes and discourses. The design of the auditorium involves the Koothambalam style found in Kerala temples.

The annual temple festival is celebrated during the second week of December. Other annual celebrations include the Arattu procession.

How To Reach Aiyappan Temple