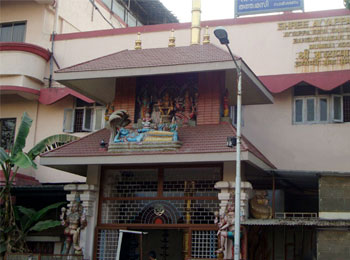 The renowned temple of Lord Ayyappa in Sabarimala is located amidst hills surrounded by dense forest. The devotees have to undergo a lot of hardship to get darshan of Lord Ayyappa at Sabarimala temple. Keeping this in mind, a group of people staying in Goregaon wanted to construct an Ayyappa temple at Goregaon, a western suburb in Mumbai. In 1953, few friends came together and decided to have an Ayyappa Vilakku in Goregaon.

The sponsors of the temple wanted to involve everyone in building the temple. Having this in mind, they went to door to door in Goregaon, collecting donations from every family . In the month of December, Ayyappan Vilakku was conducted on a specified date and time. This being the first of its kind in Goregaon, it gave an opportunity to the residents of Goregaon to meet each other in one pandal in the name of Lord Ayyappa. The Sangham had purchased a plot through the finance raised from the public for the construction of a temple. They next wanted to construct the temple for which an Asthamangala Prasna was held at the temple site. The ritual was conducted in the presence of the most revered and famous Brahmsri Maheswararu Kandararu Thantri, Thantri of Sabarimala Shree Ayyappa Temple and Shri Kanippayur Krishnan Namboodiripad, a scholar on temple architecture.

According to Asthamangala Prasana, this place had many sacred temples some 800 years ago. However, due to various natural calamities and these temples and its surrounding areas were destroyed. It was believed that the divine powers of Gods still existed in this place and was waiting for a proper abode, to grace the mankind. The Asthamangala Prasana says that the divine powers liked the presence of the Sangham indeed and showered their divine blessing on the Sangham for the hassle free completion of the project. It was decided that Lord Ayyappa would be the presiding deity of the temple with Lord Vishnu, (Guruvayurappa) Lord Ganapathy, Durga Devi and Lord Subramanya (Kaartikeya) among the other deities. It was also decided to have special Poojas performed to Lord Shiva everyday, though no separate Sreekovil is to be constructed. Navagrahas (the planet gods), were also proposed included in Temple Complex.

In accordance to the Deva Prasana, the construction of the temple building was undertaken. Shri Kanippayur Krishnan Namboodiripad was entrusted with starting the work for five Sreekovila in granite stones, idols and Navagrahas in Kerala. On May 26, 1983, the idols of these 5 deities were installed (prathishta) by Brahmashri Maheswararu Thanthri, the chief priest of Sabarimala and the temple was declared open to the public. Navgraha Prathishthas were conducted by the Thanthri in 1984 subsequently.