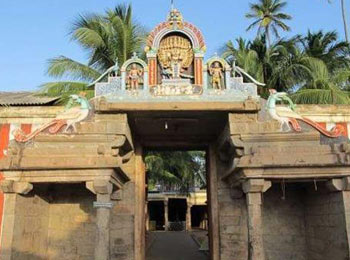 The Ayikudi Balasubramanya Swami Temple is a relatively smaller temple located at the Ayikudi village of the Thirunelveli district, Tamil Nadu, India. The temple is more popular among the tourists who visit the nearby popular attractions of this district namely, the Kutralam Falls, Kasi Vishwanathar Temple, Tenkasi and Thiruchendur.

The idol of Balasubramanya swamy at this temple depicts Lord Muruga in the form of a young boy with four hands having Vajram, Shaktivaram & Abhayam. His sacred vahana, the Peacock is seen on his left. The lord appears sitting on a lotus Padmapeetam. The name of one of the five trees of the temple (sthala virksham), is Madhulai and not Madhalai.

Thirunelveli was under control of the Travancore Kings until 1947 when unification of India happened. The Balasubramania Swamy temple is situated on the banks of Hanuman Nadhi. Lord Hanuman is believed to have stopped by and rested on the banks of this river, on his way to Lanka. Thus this river go to be named the Hanuman nadhi.

Lord Karthikeya graces in this temple along with five Vrikshas (trees) and the five Devatas, in the form of a young boy. The tamil word ‘Bala’ means ‘boy’. Thus the deity is called Balasubramania in this temple. The five Vrikshams that are found in this temple include Arasu (Surya), Vembu neem (Ambhikai), Kariveppilai Curry leaves tree ( Mahesha), Madhulai (Ganesha) and Mavilangu (Vishnu).

The idol of the deity was found by a devotee named Mallan at Nanjaipara, on the Mallam River. Once upon a time there lived a Brahmin, who was a staunch Mugura Bhakth (devotee). He is said to have become a sanyasi (Saint) and attained salvation at this place. His samadhi (tomb stone) was built on the shores of the Hanuman Nadhi. The people belonging to his community planted a prepay tree (Arasa maram) beside the samadhi and conducted various pujas at that place. The idol of Balasubramaniya that was found near the Malla river was installed on top of the samadhi, to which prayers were offered.

The temple’s roof was made of only coconut and palm leaves until about 1931. Some 150 years ago, the Thiruvadhankur Royal family is said to have taken up the administration and management of this temple. The temple was later renovated after which various festivals were organized. The Utsava Murthi is known as Sri Muthukumara swami. The moolavar is known by the name Balasubramanya. Various poojas pertaining to the temple were performed according to the Aagama Sastras by the temple priests.

During the tamil month of ‘Aipasi’ (November 15- December 15) after the ammavasai (new moon day) on the shukla paksha (growing stage of the moon) shasti thithi, the famous Skandha shasti Soorasamharam festival is celebrated for seven days. Large number of devotees throngs the temple to celebrate this festival. Lord Subramaniya adorns a different alankara (make over) every day during this seven day long celebration. Special pujas are also performed in the temple during the occasion of Chithirai Vishu, Vaigasi Vishakam & Masi Makam. The lord is taken around the temple on a procession, sitting over a Peacock. Devotees believe that getting the t of Balasubramanya swamy brings happiness and prosperity in their lives.

Devotees believe that those who get the Dharshan and pray to this Balasubramanya will attain prosperity. The temple is known for attaining Karya Siddhi or success in endeavors and Pillaiperu or childbirth for bhaktas who visit and participate in the pujas and sponsor the special offering of 'Hanuman Nadi Padi-Payasam'. The Arasa leaf Vibhuthi Prasadham (Holy Ash) available in this temple is very powerful. Padi Payasam, Kavadi, Palkudam are some of the important ways in which the devotees show their love to the Lord. According to legend, on the steps leading to the Hanuman Nadhi Sri Bala Murugan takes payasam along with other children. The Balasubramanya Moolavar Pujas were conducted in the traditional way by the sangethi Brahmins and the Utsava pujas & processions were conducted by Shivacharyas.

How to Reach Tirunelveli

The town has its own Railway Station named as Tirunelveli Railway Station. It is well connected to major cities like Mumbai, Bilaspur, Coimbatore, Guruvayur and Howrah through Nagercoil Express, Bsp Ten Express, Tiruchendur Express and Kanyakumari Express.

Regular buses are available from most towns and cities of Tamil Nadu and the neighboring state of Kerala to Tirunelveli.