The Atulya Nadeswarar Temple is dedicated to Lord Shiva and is located in Arakandanallur near Viluppuram, 3km from Thirukkovilur. It is beautifu and is situated at the hillock adjacent to south Pennai river and across the river the temple is visible. 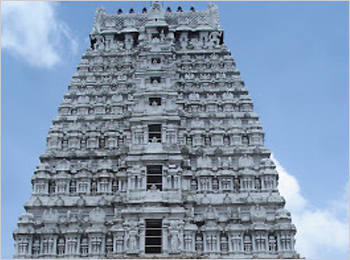 There are two main entrances to the temple: one is from the main road, another is the river side which is very scenic. This temple is one of the 275 Shiva temples glorified by the Thevara hymns. 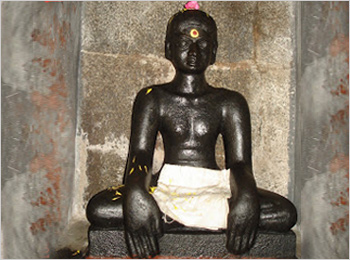 It is believed that when the Pandavas visited Arankandanallur they stayed in the cave and that the temple tank close to the cave was created with Bhima’s mace. There are two sunais (water streams) on the hillock which is said to be have been used by Pandavas and Draupadi. In this temple there is an engraving of Thirugnana Sambandar's foot. It is said that Sambandar had inexplicably moved a tremendous rock that had been placed to block the shrine and he worshipped Thiruvannamalai from this hillock top. Prasanda rishi also worshipped it. When Ramanar was young it was said that he meditated here. Dating back to 7th century the shrine has 160 feet high Gopuram and has three prakarams. The rich inscriptional evidence says that, it received Royal patronage from local chieftains, the Cholas and later from Pandyas. This is the south most rock cut cavern temple of Pallavas, with the singular exemption of Tiruchirapalli. From this hill one could get the view of Thiruvannamalai. Also an idol of Ramanar as a young boy in a meditative posture is placed there and many of his followers visit the temple. It is said that once saint Tirugnanasambandar had visited this temple and found that the doors are locked by people of other faith. He then sang hymns in praise of the God and opened the doors of the temple restoring the worship rituals.