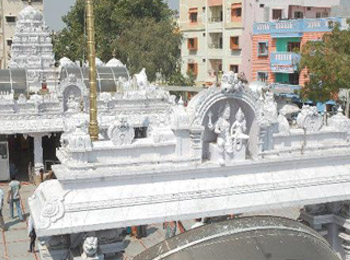 The Ashtalakshmi Temple is a renowned Hindu shrine dedicated to Goddesses Ashtalakshmi located at Hyderabad, India. This magnificent temple is situated on the outskirts of the Hyderabad city, which is also one of the important metropolitan cities in India. Hyderabad is known for many Islamic styled architectural monuments. Amidst these monuments, this temple stands unique with a touch of south Indian style of architecture.

According to Hinduism, Goddess Lakshmi is considered the Goddess of wealth. This deity finds a special place in the hearts of millions, as she is believed to bring prosperity and happiness. There are not many temples in India having Goddess Lakshmi in all her eight splendorous forms. This is one such rare temples with all forms of Lakshmi Devi.

The Ashta Lakshmi temple was built under the auspices of the Kanchi Kamakoti Peetam, and was consecrated in the year 1996. This famous shrine is situated between Dilsukh Nagar and LB Nagar, in Vasavi Colony near Kothapet (NH 9).

The design and architecture of this Ashtalakshmi temple was modelled based on the one at Chennai, Tamil Nadu. However, several modifications to the design and structure were made during the construction. This temple is a quintessential for collective endeavours of people from all spheres, who donated liberally for its construction. It almost took five years and a total expenditure of about Rs10 million for constructing this magnificent temple.

This temple is predominantly built using sand and cement, but also highlights the dexterity of artists whose works in this temple are highly commendable. The idols of Ashta Lakshmi (eight forms of Goddess Lakshmi) namely Adilakshmi, Aishwaryalakshmi, Santanalakshmi, Dhanalakshmi, Dhanyalakshmi, Gajalakshmi, Vijayalakshmi and Varalakshmi. All the eight Lakshmis have different postures. Their vigrahas are decorated with many necklaces made of gold and precious stones. The Rajagopuram of this temple is intricately carved with beautiful designs that catches the eyes of the visitors.

There have been future proposals for the construction a two-storeyed Kalyana Mandapam (Marriage hall) near to the temple at a cost of Rs 15 million and an Archaka nilayam which serves as the residential quarters for the temple priests.

The temple is beautifully illuminated with an array of lights during the night. When viewed from a certain distance, the temple appears as if it is made out of marble. On nearing the temple entrance, one can feel the divinity of this place, which is filled with the pleasant fragrances of the incense.

Durga Navratri is the most celebrated festival in this temple.

How To Reach Ashtalakshmi Temple

The nearest bus stop is Dilsukhnagar.

The nearest Airport is the Rajiv Gandhi International airport at Hyderabad.