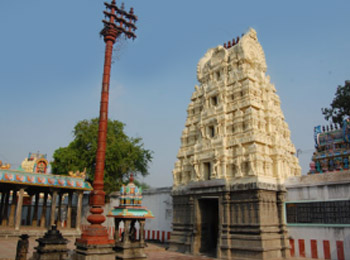 The temple of Ashtadasapuja Mahalakshmi Durga is situated in Kurichi and is devoted to Goddess Durga. This temple is said to be more than 500 years.

The Chief deity Ashtadasapuja Mahalakshmi idol is believed to be made of Navapashana, a mix of 9 herbal ingredients of high therapeutic values. Sri Ganapathi is seen gracing the devotees sitting under a Rudraksha tree. This is a very rare occurrence.

Pujas are being conducted in this temple in accordance with Vedic Agamas. A unique feature of this temple is the presence of a Rudraksha tree seen 15 feet from the Presiding deity. Rudraksha trees are generally found only at the foothill of Himalayas and in Tirupati in India. This temple has one.

A popular form of worship in this temple is Tiruvilakku Puja that is being followed in this temple since the year 1997 as venerating Ashtadasapuja Mahalakshmi Durga brings in the collective benefit of worshipping three Devis, Durga, Lakshmi and Saraswathi individually. Devotees are cured of any severe and prolonged ailment.

Under the Rudraksha tree are the two Vinayakas. Devotees are allowed to perform the pujas themselves directly to these Vinayakas.

One Danaramalinga Thevar was living with his family in the village of Kurichi situated at a distance of 10 km from Pattukottai on the Aranthangi road. He was very devoted and upright in nature. He served the poor by providing medical help, astrological advice etc. at no cost. The people of Palathali village approached Thevar to conduct the kumbabishekam of the Durga temple. He accepted to undertake as per the villagers wish and took all efforts for the grand event. The consecration was accomplished with great devotional spirit.

On one Friday, Danaramalinga Thevar heard an oracle instructing him to make an picture of the idol born out of his imagination and keep it ready. Through the oracle it was also communicated that a Siddha purasha would come to him and advise him on how the idol can be installed. Due course Danaramalinga Thevar caome to be known as Danaramalinga Swami.

On one New Moon Day (Amavasya), as per the oracle, the Siddha came to meet Danaramalinga Swami and made the idol as imagined by Thevar with 18 hands (ashtadasaujam), seated on a lion, 12 feet tall with Navapashanas. This was done in a single night. Without identifying himself, the Siddha left with a note that he was going to Kollimalai hills. The idol was named Ashtadasapuja Mhalakshmi Durga.

Tiruvilakku Puja (puja with lamps) is performed each month in the temple. Valarpirai Ashtami is also widely celebrated every month.

The temple is in Kurichi village, 10 km from Pattukottai on the Pattukottai-Aranthangi road. Bus facilities are available from both ends.

The Nearest Airport is Tirchy airport.