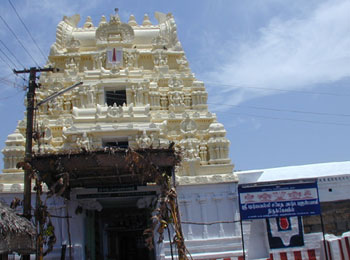 This temple is situated nearby Ashtabujham temple of Kanchipuram. This sthalm is situated about 1/2 kilometres from Ashtabhujam temple in Kanchipuram. The presiding deity is Sri Deepa Prakasar perumal or Vilakoli perumal in a standing posture. The temple is among the 108 divyadesams of Sri Vaishnavas under Tondai naatu divyadesams. Vaishanavite Holy person Tirumangai Azhwar had applauded Vilokkoli Perumal in his Managalasasanam occasion of Lord Varadaraja Perumal giving Darshan on His Garuda vahan to Saint Vedanta Maha Desikan in Vaikasi is stupendously celebrated in May-June. The Aavani celebration in August-September of Lord Vilakkoli Perumal going by Desika's holy place and the one in Margazhi (December-January) of Perumal respecting Desika are the celebrations that request numerous eyes for the devotees to appreciate the Lord's open from 7.30 a.m. to 10.00 a.m. also, from 5.00 p.m. to 7.00 perform Tirumanjanam to Lord and Mother offering vastras on understanding their wishes. 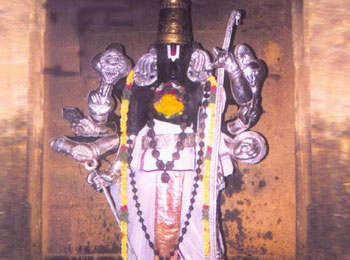 Vimana over the sanctum sanctorum of Lord Narasimha is called Kanaka Vimanam. Sage Brugu had venerated Perumal in this temple. Sri Sudarsana Chakkarathazhwar the divinity of Lord Vishnu's talk about graces from a holy place in the external hallway prakara. Sri Garuda Bhagwan in the Narasimha holy place shows up with his head marginally on a side as though not able to hold up under the Lord's anger. This is a weird and diverse style of Garuda in this temple. As per sacred writings, Lord conceded darshan to sage Brugu Saint Peyazhwar in his songs commends this place of worship equivalent to that of Lord Kumbakonam and Tirupathi. Vaishnava Acharya Sri Mahadesikan had commended Perumal in his observed Kamasikashtakam. Droning this sloka day by day will acquire advantages of the endowments of Lord Narasimha. The place of worship is otherwise called Kamashika Narasimha Sannadhi. The temple is one among the 108 Divyadesas of Perumal. This is the only Perumal Temple where Lord appears with 8 hands-bhujas. A separate Mangalasasanam is addressed to Mother by Azhwar only in this temple. Lord Brahmma felt sad that He was not respected with idol worship on earth as to other Lords and organized a great yajna to realize His wish. He left Mother Saraswathi. Mother Saraswathi sent some powerful demons to stop the yajna. Brahmma too prayed to Lord Vishnu to protect Him from the enemies. Lord Vishnu appeared there with 8 hands-Ashtabhuja Perumal-drove away the demons and the Kaali following and helped Brahmma complete His yajna successfully. This is the 44th Divya desa with the Mangalasasanam of Saints Peyazhwar and Tirumangai Azhwar. This is the only Vishnu temple with a Mangalasasanam dedicated exclusively for Mother Alarmel Mangai. According to scriptures, Lord Vishnu was in this place as Adi Kesava Perumal even before His fame as Ashtabhuja Perumal after Azhwars’ Mangalasasanams. Perumal is holding discus, sword, flower and an arrow in His right 4 hands, conch, bow, armour and club in the left four hands. The entrance and Sorgavasal in Perumal temples are generally in different directions. Both are facing north in this temple, a special feature. Perumal saved Mother Bhoomadevi from the demons at this place. Hence, those buying Bhoomi – land either to build a house or for farming or facing difficulties in houses built already pray to Perumal to make their Bhoomi-sites a prosperous place. 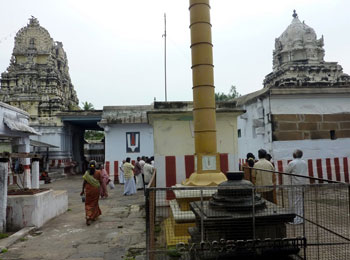 The Vilakkoli Perumal’s Moolavar in this sthalam is Sri Deepa Prakasar. He is also called as "Vilakkoli Perumal, Divya Pirakasar". Moolavar in Standing position facing West Direction. This is the Prathyaksham for Lord Saraswathi. The Thayar is Maragathavalli Thayaar. The presiding deity is Adikesava Perumal along with his consort Alamelumangai. The Perumal in this sthalam is Aadhikesava Perumal and he is seen with 8 hands. He holds Chakaram, Sword, a Flower and an Arrow on the 4 right hands and Sangu, Bow, Kedayam (which is used to protect while fighting using a sword) and Gadha (Which can be found along with Hanuman and Bhima).

Vilakkoli Perumal temple in Kancheepuram is one among the 108 Divya Desas of Lord Vishnu. Perumal granted darshan to Mother Saraswathi in this temple. The place is also known by the name Thoopul as it was dense with Dharba grass then. This is the birth place of noted Vaishnava Acharya Sri Vedanta Maha Desika, hence the Acharya is also praised as Thoopul Vedanta Desikan. Saint Tirumangai Azhwar had sung his Mangalasasanam on the temple. Sri Maha Desikan is a gift to his mother who prayed to Lord seeking child boon. Responding to her prayer, Lord of Tirupati – Lord Venkatachalapathi asked the Bell in His hand to be born the son of the mother. Bell is not used during pujas in Tirupati temple after this event. Born in the year 1268, Sri Desika was centenarian plus till 1369. He was an outstanding scholar of highest degree in the scriptures. He rendered a large number of Sanskrit works in Tamil. He has also authored in Tamil the Adaikala Pathu (Asylum 10) on Lord Varadaraja Perumal. Desika’s son Nayina Varadachari completed the construction of this temple, it is said. There is a separate shrine for Sri Desika in the temple. Lord Lakshmi Hayagriva idol worshipped by Sri Desika is still in the temple. His Avatar Utsav is celebrated in the temple on the Revathi star day in Chithirai month-April-May. Lord Brahmma the Creator was sad that he had no temple in Earth and conducted a yajna dedicated to Lord Shiva. He failed to invite His own consort Mother Saraswathi. Angry Saraswathi cursed that there should be no light to conduct the yajna. Brahmma fell at the feet of Lord Vishnu for light. Perumal granted darshan to Brahmma in the form of jyoti-light and helped him. As Perumal gave light – Vilakku Oli in Tamil- He is called Vilakkoli Perumal and Deepa Prakasar in Sanskrit. Perumal also helped a compromise and re-union between Brahmma and Saraswathi. Yogi Mahasandan decided to renounce his life in this earthly world and to reach the lotus feet of Lord Vishnu. He plunged into penance for the purpose. Mahasandhan had such powers equal to Indira the king of Devas. Indira was shocked by the penance of Mahasandan and sent alluring beautiful women of his world to entice Mahasandhan to spoil his penance. They could not move the yogi. Finally, Indira came in the guise of male elephant and succeeded in his design. The yogi enticed by the beauty of the elephant, took the form of an elephant himself and wandered in the forest till he reached Salagramam for a bath. The yogi elephant was able to recollect his penance and the defeat he suffered then. It began visiting the Divya Desas, worshipped Perumal and sought a remedy for the folly it committed. Sage Mrikandu advised the elephant to go to Kanchi and worship Lord Varadaraja Perumal to realize its wish. It so happened that the elephant came to Lord Ashtabhuja Perumal temple and began worshipping Him 14,000 flowers each day. As it could not get sufficient flowers one day, it began plucking flowers from a nearby tank and was caught by a crocodile. As Gajendra did in the past, this elephant cried ‘Aadhi Moolame’ for protection. Lord, as He saved Gajendra in the past, appeared before the yogi elephant on His Garuda, cut the crocodile with His discus and granted salvation to the yogi elephant.


This is one of the 108 Divya Desas of Perumal. Devotees pray for child boon and to achieve excellence in education.


Those buying building sites and farm land and those facing problems in houses built already pray to Perumal for removal of any evil elements in the places. Devotees perform Tirumanjanam to Perumal and offer vastras.


The closest airport is in Chennai.


The temple is 2 km from Kancheepuram bus stand at Tirukachi Nambigal Street in Chinna Kancheepuram.