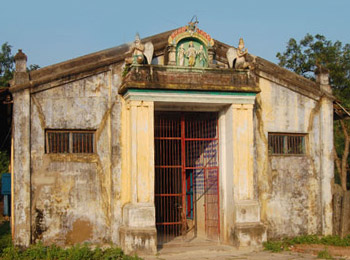 Under the single-floored vimaanam, Varadaraja Perumal with conch and wheel (chanku and chakram) appears in the standing posture. At the ardhamandapam in front of the Swami sanctum is the ‘Monkey-Aanjaneyar’. He is without a crown like an ordinary monkey in the service of Lord Rama. He holds the rosary beads (japamaalai) between his joined palms. Opposite to Swami is Garudaalwar in a mandapam. Here are portrayed the Dasavathara pictures of Lord Vishnu. The consolidated ‘Naalaayira Divya Prabandam’ is also written on the wall.

The Lord is specially called ‘ Varam tharum Varadarajar’ – ‘Boon granting Varadarajar’ as He grants the boons asked. The tradition is that by worshipping this deity, one can enjoy Paradise while living and receive ‘moksa’ after life. Hence, there is no ‘Swarga Vaasal’ – ‘Paradise Door’ here. On the Vaikunta Ekadasi day, the sanctum’s doors are opened as ‘Swarga Vaasal’. The Lord goes out through this door. At that instant, we can worship together the utsava icon leaving the ‘Swarga Vaasal’ and the Prime Deity Varadarajar.

A Vishnu-devotee had an ache in the mind that there was no Vishnu temple in this place. He prayed to the Lord that a temple be built here. Once the Lord appeared to him in his dream and pointed at the nearby pond, and also made him know that there lay his image. Accordingly the bhakta went to the pond and found out the statue. He consecrated the statue here and erected a temple. The Lord was also named ‘Varadaraja Perumal’.

Guru Bhagawan’s grace in the horoscope alone will motivate marriage and beget children. This is called ‘Guru paarvai’ – Guru View. To receive this, devotees conduct ‘archana’ to the Lord, and worship by lighting lamps. Prayers are also conducted to acquire wealth and for the welfare of life and family.

Since Swami’s star is Hastham, this temple is the sacred remedial place for those who are born in this star. In order to ease out the problems created by the planets Guru, Sani, Raagu and Ketu, and also for the ill effects caused by the planetary movements, the Hastham-born people offer worship here. Devotees light lamps and pray to get married, beget issues and the family to become wealthy

The devotees perform thirumanjanam to the Lord and adorn Him with Tulsi garland. Sweet-rice is also offered.

The Nearest Airports are at Tiruchirapalli, Chennai Airport.