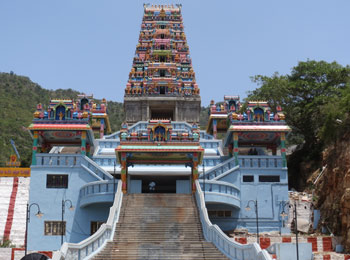 The Subramaniyaswami Temple is dedicated to Hindu god Murugan, situated near Coimbatore, Tamil Nadu, India. Like most Murugan temples, the temple is situated upon a hillock, part of the Western Ghats about 15 km west from the city of Coimbatore. Near the foothill, there is a temple for Pillayar known as the "Thaan thondri Vinaayakar".

Arthajama Puja: The idol for Lord Muruga was made by Pambatti Siddhar which adores the sanctum sanctorum in the temple. As in Palani, He is gracing with a staff as Dandapani, He has a tuft too, wearing anklets at the feet. The Lord Graces in three styles of dressings (Alankaras) Royal form, sacred ash and sandal paste dressings. On special days, the Lord is covered with silver and gold ornaments, crown etc. Only during the Arthjama Puja, Lord Muruga appears as Dandapani (holding a stick in Hand) in a simple form wearing a dhoti.

Saint Arunagiriar has sung the praise of Marudhachalamurthy in his Tirupugazh hymns. This temple is regarded as the seventh army camp (Padaiveedu) of Lord Muruga.

Snake Muruga: There is a snake form in the rock in the Pambatti Siddhar shrine. It is said that the Lord granted darshan to the Siddhar in the form of a snake. Hence, devotees consider this as Muruga Himself. There are three other forms behind this place appearing as Peetas- seats, which are worshipped as Lord Shiva, Mother Ambica and Lord Vinayaka. Generally, Lord Muruga occupies the place between Lord Shiva and Mother Ambica. Here, Vinayaka is with His parents.

Aadhi Murugan: Lord Shiva graces as swayambumurthy in ancient Shiva temple. Here Lord Muruga is a swayambumurthy. His consorts Valli and Deivanai are also Swayambus. There is a crack behind the Swayambu Muruga. Valli is taller than Deivanai. He is the original Lord of the temple and his shrine is called the original sanctum sanctorum-Aadhi Moolasthanam. The Puja is first performed in this shrine and then to Muruga in the present sanctum sanctorum. Milk abishek is performed to this Muruga during Krithika star days.

Somaskanda Shrine: Lord Muruga with his divine parents Lord Shiva and Mother Ambica is known as Somaskanda. Here too, Lord Muruga graces in the same form. Though a Muruga temple, there is a shrine for Lord Patteeswarar on the right and one for Mother Maragadhambika on the left.

Muruga riding a horse: Though the known vehicle of Lord Muruga is peacock, in some temples, He is taken on a horse also in procession. The story behind this tradition is this. In days of yore, some robbers entered the temple and escaped with their booty. Lord Muruga intercepted them and recovered the stolen items and converted them into rocks. The foot step signs of the horses are still visible on a rock called ‘horse foot print stone – Kudirai Kulambukkal’. There is a sculpture depicting Lord Muruga on a horse.

A siddha saint, named Pambatti Siddhar, from his young age used to catch snakes, undo their poisonous effects, prepare medicines to cure such bites etc. People called him Pambu Vaidya – Snake doctor. He came to this place to find a snake having a gem – Nagarathna pambu. A sage – rishi met him on the way and told him that the purpose of life was to find the snake in the human body (Kundalini), control it by yoga and added that what he was doing was sheer waste. Pambatti Siddhar got relieved from ignorance and began to meditate upon Lord Muruga. The Lord gave Siddha darshan with His consorts Valli and Deivanai. Lord Muruga is praised as Marudamalai Ma Mani. (Ma-big, Mani-gem).

Devotees carry 108 milk pots to the Lord on the Vaikasi Visakam day in May-June. 10 day Brahmmotsavam is celebrated with Thaipoosam in January-February. The wedding festival is celebrated in the morning of Thai poosam day and a car festival in the evening when the Lord is taken in procession on Elephant vahana. The Lord also comes in procession every day in golden chariot.