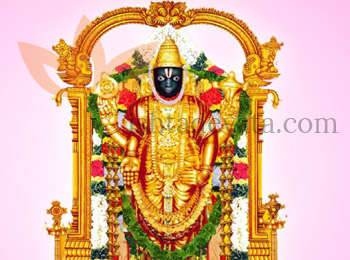 This temple is facing the west. The western part of the hillock Thandhondrimalai is elevated at the eastern part. This temple is a cave temple where the Sanctum Sanctorum, the deity Perumal is presented is in the eastern part of the ‘Artha Mandapam’. With two pillars, there is a big stage in the Sanctum Sanctorum whose three sides were deepened. In the east of the stage, facing the western direction, Arulmigu Kalyanavenkataramana Perumal poses with Goddess Lakshmi in His Chest. Lord Perumal is also known as Bhaktha Pratheenan.

On the top, in a beautiful cave (Kudavarai) is the Lord Venkataramana swamy. He is seen facing west in the standing position and blesses the people. Here, Lord Vishnu poses gigantically with Goddess Lakshmi in his chest. There is no separate shrine for the goddess here.

There are many stories on the name 'Thanthondri'. It is believed that this hillock has formed itself and some others say that it was found by devotees of the Lord. Also it is said that there was a king named Thaamaan Thondrikon who ruled over this region with his residence at this hillock which is evident from the Puranaanuru. A few say that this place could have been named after him.

In Thirupaarkadal once, Lord Vishnu was conversing with his Goddess Lakshmi. Adhisheshan was guarding the entrance. Vayubaghavan wanted to see the Lord but Adhisheshan did not permit. It started a debate between them on who is stronger and powerful. To solve it, Lord Thirumal gave them a task to accomplish which is Lord Adhiseshan should hold Thiruvenkatamalai (Venkatachalam) with his body and Vayudevan is to take the hill out of the clutches of Adhisheshan. Adhisheshan held firmly, so Vayubhagavan could not succeed in his attempt and he was furious. He transformed into a great cyclone and broke the hill. It was thrown into pieces in all directions and one such piece is Thanthondrimalai. This hillock having got the holiness of the Thiruvenkadamalai, is also called as the 'Then Thirupathi'.

There was a priest who performed the pujas regularly. Once he sent his as he could not come on that day. On that day a devotee came there with life size garland. The boy was so short so he prayed the Lord to bend a little. Lord Perumal also bent so the boy happily decorated the Lord with the garland.

The 22 day Purattasi festival in September-October, 17 day Masi Magam car festival in February-March, Krishna Jayanthi in August-September, Vaikunda Ekadasi in December and Tamil and English New Year days are the festivals celebrated in the temple.

People pray for cure from pimples and scars in the body by offering salt, pepper and jaggery. They also pray for marriage proposals, child boons and health problems.

The nearest railway station is in Karur.