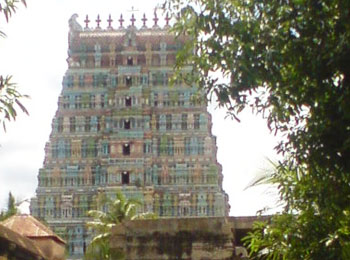 There is a lofty Rajagopuram that stretches up to 150 feet and an imposing Teppakkulam tank with a mandapam, named Aanai madu adorn this shrine. Airavatam the elephant of Indra is said to have created this tank. There are three shrines in this temple associated with the three functions of creation, preservation and completion. The presiding deity lord shiva is called as Kaaleeswarar, Someswarar, Sundareswarar and the Ambal his consort mother Parvathy is called as Swarnambikai, Soundara Nayagi, Meenakshi . Additional to that there are 3 separate shrines for both the male and female deities of famous Shiva temples in a mandapam outside the shrine. The temple of Kalaiyarkoil is a very large and handsome building surrounded by a strong stone-wall about 18 feet in height. Kalaiyarkoil has two Rajagopuram viz big and small one.There is a big Tank on the Southern side of the Temple.

It is situated in front of the Kaleeswarar Sannathi. It was built by Maravarma Sundara Pandian in the 7th Century. It is height is 90 feet and breadth is 57.8 feet. In the inner part of the Gopuram, sculptural drawings are seen. The smaller tower on the north owes its existence to Varguna Pandian (1251 -1261 A.D).

It is front of the Someswarar Sannathi. The new tower on the south was built in the 18th century by the Marudhu brothers under Rani Velu Nachiar’s command. It is 155 ½ feet tall and the breadth is 93 feet. It is said that bricks were brought from karumalai near Manamadurai. By forming a human claim from Karumalai to Kalayarkoil. It was built by the sweat and toils of the thousands of workers who worked heart and soul. One who is standing at the tower of the Rajagopuram can able to see Madurai Meenakshi Amman Kovil tower at West and Tondi see at East.

There is big tank on the Southern side of the Temple, an exact replica of Madurai Mariamman Theppakulam (Tank) but smaller in size. It is called “Aanaimadu” meaning elephant tank. According to Puranas, the white elephant Iravatham of Lord Indira was cursed by a saint. To remedy the curse, the elephant Iravatham was ordered to pray to Kaleeswarar for his salvation. The tusker using his hard Ivory( Tusk) dug a tank and performed poozas and abishekham for Sorna Kaleeswarar and Sornavalli Amman. The god and Goddess blessed Iravatham and the curse was removed.

There are three shrines dedicated to the three presiding dieters. The first shrine is dedicated Sthoolalingam the 2nd shrine is dedicated Kaleeswarar representing Saotchumalingam and the third shrine is dedicated to Sundareswara representing Karanalingam. Their consorts are Goddesses Soundara Nayaki, Sri Sornavalli and Meenakshi respectively. According to Puranas, Lord Indira was cursed by a saint. He came her and prayed to Sornakaleeswarar and Goddess Sornavalliamman . At once he was removed of his curse. He erected a Sivalinga here and prayed daily.There are 3 separate shrines for both the male and female deities at this sivasthalam. Stone inscriptions from the periods of Maravarman Kulasekara Pandian I, Jadavarma Sundara Pandian II, Veerapandian and Vanaathirayan are found in this temple. The credit for expansion and renovation of this temple goes to king Maruthupandian.

Kalaiyar kovil derived its name from the Kaleeswarar temple of the place. Kalaiyar is a corruption of the word Kaleeswaran. During the Sangam period, this place was known as Kaanapair as is seen from the 21st verse in the purananooru sung by Iyur moolakizhar, a poet of the Sangam period. In the 9th Century A.D. Saint Sundara moorthy nayanar described the presiding deity in his devotional songs as Kaalai. Since then the deity was known as Kalaiyar, with the Tamil suffix yar added to it denoting respect. The temple came to be known as Kalaiyar kovil and later adapted to the place also.

History narrates that on June 25, 1772, the Company forces under Col. Joseph Smitt and Cap. Bonjour marched towards Kalayar Kovil. The second king of Sivaganga, Muthu Vaduga Natha Thevar (1750 - 1772) and Maruthu brothers defended it bravely. Rajah Muthu Vaduganatha Thevar in anticipation of the English invasion made every possible preparation for defence. But the brave Rajah Muthu Vaduganathar with the many of his soldiers fell dead in the kalaiyarkoil battle. The invading English forces plundered Kalaiyarkoil and collected jewels worth 50,000 pagodas. Kalaiyarkoil temple belongs to Sivagangai Devasthanam. The temple was kept locked and prayers stopped for some time. it was later re opened and substantial repairs and development were done by the nagarathars of devakottai, especially the Zamindar family. In fact Shree AL.AR.RM.Arunachalam Chettiar, zamindar of devakottai took up sanyas and moved to the vedantha madam at kalayar kovil. He was known as Shreelashree Jamindar Arunachala Gnana Desiga Swamigal and his samadhi is in the rear of the madam. Shree Zamindar swamigal, senior heir had started AL. AR. Trust to conduct daily, monthly poojas to God Sorna Kaleeswarar. This is performed continously by his eldest son AL. AR. Kalairaja Chettiar, thereafter by his grandson AL. AR. K. Veerappan Chettiar and even now subsequently by his heirs

The nearest airport is at Madurai. The railway station at Sivagangai is on the Karaikudi - Manamadurai section of the Southern Railway. Bus facilities from Madurai, Sivagangai, Karaikudi, Thiruvadanai and Devakottai are available to go to Kaalayar Kovil.