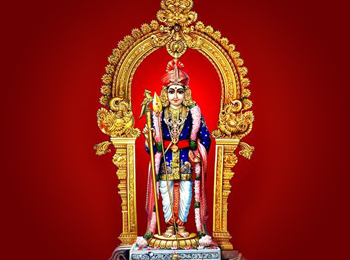 The Dandayuthapani Swami Temple is located in Madurai and is dedicated to Lord Shiva. This 2,000 year old temple is one of the prides of the temple city.

This is a temple noted for the Alankara – dressing of Lord Muruga. The Lord appears in royal attire. As the Lord took a pilgrimage Himself to Palni, He is named Dandayuthapani. He is also praised as Madurai Palani Andavar.

The main hall Maha Mandap – of the temple has beautiful sculptures depicting the six army camps (Padai veedu) of Lord Muruga, Tiruparankundram, Tiruchendur, Palani, Swamimalai, Tiruthani and Solaimalai-Pazhamudhirsolai. Lord Muruga graces in the sanctum sanctorum as Dandayuthapani holding a staff in the right hand and keeping His left hand on the hip. Lord almost appears in His royal attire.

Saivite Saint Sundarar who was friendly with Lord Shiva (Saka Marga) visited Madurai during the seventh century and stayed in this temple. It was then called Sundarar Mutt based on this event. He continued his journey to Tiruparamkundram from here. This establishes the antiquity of the temple dating back to that period. Some devotees used to carry the procession deity on their heads to Palani on Thai Poosam day. Abishek would be performed to the idol there. The practice did not continue in later years. As Lord Muruga visited Palni, He is named Dandayuthapani. He is also praised as Madurai Palaniandavar.

Skanda Sashti in October-November, Panguni Brahmmotsavam in March-April, procession of Lord Muruga on Kruthika star days, Vaikasi Visakam in May-June, Thai Poosam in January-February, Vinayaka Chaturthi in August-September and Navarathri in September-October are the festivals celebrated in the temple.

How to Reach Annamalai Murugan Temple

Frequent city bus service is available from various parts of Madurai upto Periyar Bus stand. From here the temple is just a short walk. The nearest Railway Station is Madurai. The nearest airport is in Madurai.