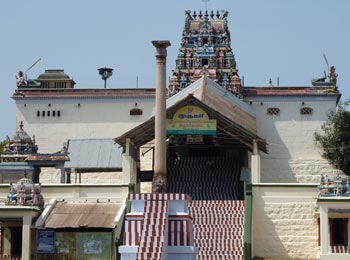 The Balasubramaniar Temple is situated in Vennaimalai. It is dedicated to God Shiva. This temple is over 1,000 years old and is located in Vennamalai, Karur.

While in profound contemplation Yogi Bhagvan had the fortunes of having the Darshan of Lord Muruga and was told to make it known to all that He was in Vennaimalai slopes. The Yogi promptly educated Lord's desire to Karuvur ruler who quickly constructed a Mandap under the tree and introduced Lord Balasubramaniar. The temple appeared.

The ruler likewise constructed sanctums for Kasi Viswanatha and Visalakshi on the southern side and introduced the Shanmuga Yantra on the north of the Lord's hallowed place. Just Thanjavur Brahdeeswarar temple, Karur Pasupatheeswarar temple and Vennaimalai Murugan temple has a place of worship for Karuvurar Siddhar.

Lord Brahmma got to be distinctly glad for his calling of making the world and the creatures. Lord Shiva needed to instruct a lesson to him. At a phase, Brahmma couldn't proceed with his creation work. He understood his habit and asked Shiva's exculpate. He was prompted by Lord Shiva to perform compensation in Vanjivanam. Interim, the creation employment was endowed to the perfect cow Kamadenu. Kamadenu made a hillock of butter and furthermore a spring with sweet water to shield every one of the creatures from thirst and appetite. This is the reason, even today, the stones of the slope is wonderfully cool notwithstanding amid hot summer. Remaining in the very place favours the individual with astuteness and freedom from shades of malice. Lord Balasubramania is all effortless in the temple.

Kruthika star day in the month of Karthikai (November-December), all Mondays, Thai Poosam in January-February, Panguni Uthiram in March-April is observed as festival days in the temple.

How To Reach Arulmigu Balasubramanian Temple

The temple is situated at a distance of 5 km on the way to P. Velur from Karur via Vengamedu. The Nearest railhead is Karur railway station. The Nearest Airport is Trichy Airport.