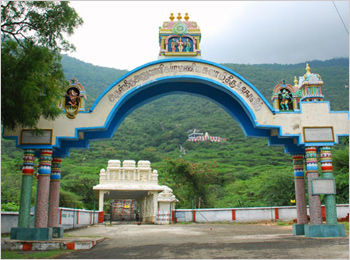 The Anuvavi Subramanyaswamy Temple is a Subramanyaswamy temple located at Periyathadagam. It is 12 kms from Coimbatore. Lord Subramaniya is the chief deity here is with his partners Devayani as well as Valli. This temple is manage by Tamilnadu Government. The word Hanu stands for Sri Anjaneya. Vavi in Tail means water resource. Hanuvavi means a water source that appeared for Hanuan-Anjaneya. In days that followed the name changed as Anuvavi. As Kumara-Muruga helped Hanuman, the hill is also praised as Hanumakumaran Malai. Malai in Tamil means hill. 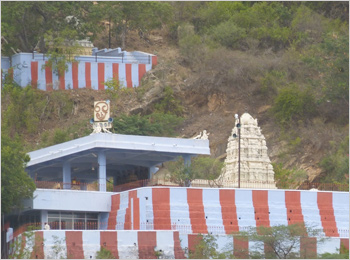 Swayambumurthi presiding deity and the five mango holy trees were washed away by nature's fury in the year 1957. The new temple was built in 1969 and sanctification celebrated. The temple is 1 km far from the foot hills with 500 steps. Idumban shrine is before the hill temple. A small Lord Ganasha temple is on the way. Next to Lord Subramaniya is the sannathi of Anjaneya Swami along with a small wood ‘rath’ or ‘chariot’ that is used to take the deity about the temple in 'Parikrima'.When people climb the steps in line to the Anjaneya sannathi, the place where Anjaneya quenched his thirst. Adjacent to that is the spring from where water is collected in the tank. There is a shrine for Navagrahas the nine planets. In this temple, Lord Shiva blesses in the name Sri Arunachaleswara. 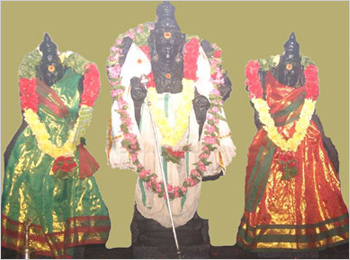 Lord Subramania in the temple is a swayambumurthi(Self formed). Presiding deity, Muruga blesses devotees in His standing posture with consorts Valli and Deivanai. 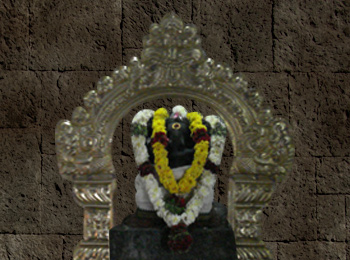 While returning back carrying Sanjeevi hill Lord Anjaneya was thirsty and paused here to satisfy his thirst. Unluckily he was unable to get water in that region. Thus he prayed to Lord Muruga for water. Responding to his prayer Lord Muruga came with Deivanai and his weapon "VEL", stabbed the hill from which water began to flow. Thus Lord Anjaneya quenched his thirst. Today also the villagers use the water from this pond intended for drinking and supplementary purposes. In the year 1969 the last Kumbabhishekam was performed.

Kirthikai, Ammavasai, Saati, Visagam, Aipasi Sura Samharam in October-November, Kruthika star days and Karthikai in November-December, Panguni Uthiram in March-April, and Vaikasi Visakam in May-June, Thai Pusama are the festivals celebrated in the temple with special abisheks and pujas.

The spring in the hill is mentioned as Kanachunai – meaning not discoverable – in a document by a king of Mysore. It is perennial. People use to place a flower on the head of the deity seeking His approval before starting any new work.

Those seeking child boon worship here for five Tuesdays. Bathing in the spring before sunrise continuously for some days offers an effective cure for mental and skin diseases.

Buses are available from Coimbatore Ukkadam bus stand to Anuvavi. Buses to Anaikatti from Gandhipuram bus stand pass through Anuvavi temple turning point. The temple is 2 km from this point.