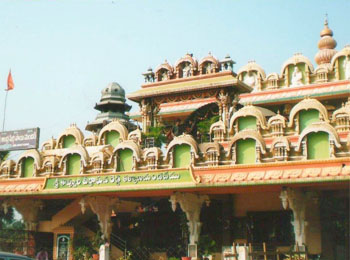 Shri Shirdi Sai Temple is located in Balabhadrapuram Village, 5kms from Bikkavolu in the East Godavari District. The temple is situated at a distance of 40 km from Kakinada, which is a popular town and the district head quarters of East Godavari District. Shri Shirdi Sai Baba is the presiding deity of this temple. The Shirdi Sai Temple is originally from the place of Shirdi in Maharashtra. Inorder to differentiate this temple with the original one, people also call this the Andhra Shirdi Temple.

The construction of Shri Shirdi Sai Temple in Balabhadrapuram was completed in the year 2004 by the devotees of Sri Shirdi Dai Baba. It took 9 years for the completion of The temple. The Statue of Shri Shirdi Sai Baba was laid in this temple on 17th February 2004. Shir Shirdi Sai Baba is widely worshipped as an Indian yogi, Baba and fakir by both his Hindu and Muslim devotees. Shirdi Sai Baba is believed to have lived from 28th September 1838 to 15th October 15, 1918 at Shirdi Village of Maharashtra State. The temple Management is stated to have spent Rs.3 Crore Indian rupees for the construction of the temple. They have also said to have further plans for development and expansion at a cost of 2 crore rupees.

Legend of the Temple

Hindu Devotees of Shri Shirdi Sai Baba believe that he is an incarnation of Lord Shiva or Dattatreya. Most of his devotees consider him as a Sadguru or an enlightened Sufi saint. The name ‘Sai’ is of both Indian as well as Arabic/Persian origin. The word ‘Sai’ refers to “Sakshat Eshwar” or the divine. ‘Baba’ denotes to father or an elderly man. Thus the name Sai Baba means the “holy father”.

Shri Shirdi Sai Baba is said to have reached Shirdi village at the age of sixteen. Details regarding his parentage, birth details, etc remains obscure. This led to speculation about his origins after his arrival to Shirdi Village. His followers believe that he had no attachment towards materialistic things in life and was on the path of self-realization. Shirdi Sai Baba has followers all around the world. He is considered a very powerful and divine saint of the past century. His preachings revolve around the principles of compassion and love, forgiveness, charity, contentment, inner peace, and devotion to the almoghty. Sai Baba’s teachings is a combination of principles of Hinduism and Islam. The mosque where Sai Baba was believed to have lived, has been be given a Hindu name Dwarakamayi by himself personally. He is said to have practiced both Hinduism as well as Islam. He was well versed in both Sanskrit and Arabic and preached the practises of both the religion at Dwarakamayi. Sai Baba was buried in a Hindu temple in Shirdi on attaining Samadhi. “Sabka Malik Ek” which means “One God governs all” has become the most popular preaching among his devotees. This is associated with both the Bhagavad-Gita which is considered the holy book of the Hindus and the Sufism to the Muslim devotees. Shri Shirdi Sai Baba is mentioned saying the epigram “Allah Malik” (“God is King”).

Gurupurnima is the festival that is celebrated with complete enthusiasm and bliss.

The following are the various poojas performed to Sri Shirdi Saibaba at Balabadhrapuram.

The nearest airport to this temple is Sri Shirdi Saibaba Temple at Balabhadrapuram is the Rajahmundry Airport, which is around 35 km away. One can hire a cab from the airport to reach the temple.

Sri Shirdi Saibaba Temple in Balabhadrapuram Village is well connected by road from all places in Andhra Pradesh. It is approximately 40kms away from Kakinada the nearest town. Government and private buses and taxis are operated from Rajahmundry.