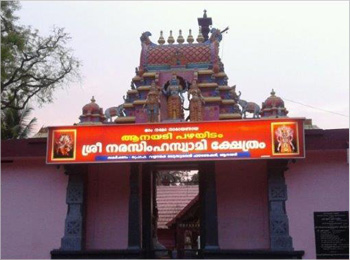 Anaiadi Pooram is the annual festival of this temple. Anaiadi Pooram is the one and only festival, in which hundreds of elephants line up for procession. This is the largest elephant festival (Gajha Mela) in the world. So this temple attracts thousands of pilgrims as well as tourists including foreigners every year. Above every obstacle like religion, cast and language, everyone can get the dharsan (vision) of Narasimha Swami. Moreover, Anaiadi temple promotes traditional arts like Kadhakali, Chakyar Koothu, Nangyar Kooth, Villadichan Paattu, Harikadha, Kadhapresangam, etc. Anaiadi temples have a major role in the cultural and tourism development of Kerala.

There are no regular flights from other major cities of the country to Kollam. Nearest airport is Trivandrum International Airport.

Kollam is well connected to other major cities via regular trains.

You can easily get regular buses to Kollam from other major cities.