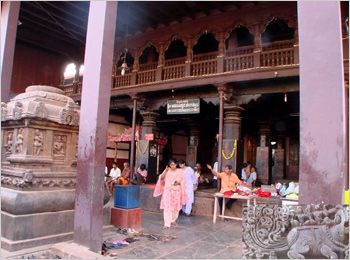 The Shrimat Ananteshwar Temple is a temple dedicated to Lord Vishnu, situated in Manjeshwar in the Udupi district of Karnataka. The deity, like any Shavite shrine, is in the form of a Linga. Manjeshwar is near Kasargod, Kerala which is a neighboring district of Dakshina Kannada, closer to Mangalore. It is known to be one of the 18 towns of old Dakshina Kannada. It is one of the earliest temples of all GSBs(Konkani).This temple dates back to 2nd century A.D. The wealth belonging to the temple had been plundered from time to time by pirates and overlords. This place is also the birth place of the poet-laureate of Kannada Language, Manjeshwar. All the research papers on the History of GSBs was written by him. Apart from this, he has also written the history of Mulki Shri Venkatraman Temple. 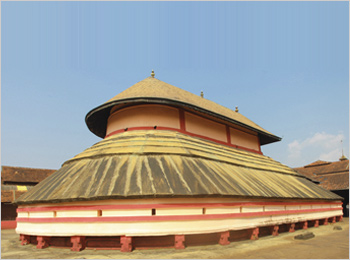 MANJULAKSHETRA or MANJESHWARA is the name derived from the deity “SRI MANJARISHA” or Srimath Anantheshwara of the sacred Manjeshwar Temple.

It is considered as the most ancient existing temple of the Gowda Saraswat Brahmins. As per the information available, the temple dates back to 8th century A.D. The Temple was last renovated in 1799 – 1804 A.D. After it was demolished by a ruler og the neighbouring kingdom, H.H Srimath Vibhudendra Tirtha Swamiji, the then Peetadhipathi of the Kashi Math Samsthan took the initiative in the restoration of the Temple and re-installing the presiding deity Shri Bhadra Narasimha.

MANJESHWAR or Manjulakshetra a place with a great Puranic background is renowned for its temple dedicated to Srimad Anantheshwara. The temple is rather unique for its deity, who is Shri Shiva accompanied by Shesha or Anantha. Obviously, the town derives its name from the presiding deity Srimad Anantheshwar changed into "Madanantheshwar" and then into Manjeshwar during the course of time. The idol of Lord Shiva is believed to be an "Udbhava" or "Swayambhoo" (Self emergent). Besides the idol of Shiva, there are idols of Lord Narasimha and Lord Subramanya, the latter rarely worshipped in South Canara. Originally in the Madras State but now in Kerala, Manjeshwar is located 17 Kilometers south of Mangalore on the Cochin - Mangalore section of the Southern Railway, the Temple is about a Kilometer and a half from the Railway Station, being easily accessible by metalled road. By road, it is about 23 Kilometers south of Mangalore on the National Highway 66. The nearest Airport is Mangalore.

There are 2 parts to the Sanctum Sanctorum (Sri Garbhagriha). One is visible to the devotees and the other hidden behind the Altar (Moola stana). The entire altar is said to be built over an anthill called Rohini or Ruvvani in Konkani.

Visible at the bottom, is the Shivalinga of Srimath Anantheshwara, made of granite. The temple is named after the deity. This Linga is considered self emerged (Swayambhoo). The era of its detection is not known. On the second rung are two deities of Nagaroopi Subramania- one is ancient and the other recently installed. At the center is Sri Bhadranarasimha – the presiding Deity in a standing position accompanied by Sridevi and Bhudevi- His consorts. Visible on the top are the shilas of Sri Vittala, Sri Vedavyasa, Sri Laxminarasimha, Sri Keshava, Sri Krishna, Sri Karalanarasimha and others. Many other idols are partly noticeable including that of the Utsavamurthy of Utsava Narasimha. 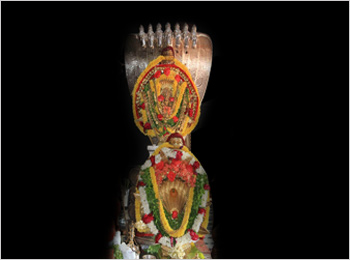 The Serpent God, Shri Ananta, the incarnation of Lord Vishnu, Lord Narasimha;and Shri Ishwar are the three main deities of this temple. From the local Naga worship to Shaiva cult and then to Vaishnava Cult, it portrays a distinctive living example of evolution of worship of different deities in its long past. One greater example of GSB culture of tolerance is that instead of one cult replacing the other in Manjeshwar, they compliment each other in this temple. 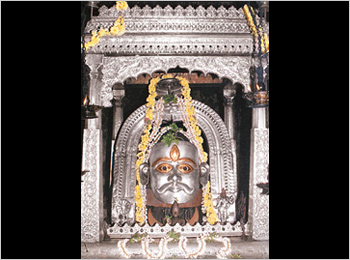 The origin of the Temple: The origin of the temple dates back to more than thousand years with many myths and anecdotes woven round it. Perhaps, the earliest reference to the temple is in connection with the visit of Shri Matsyendranatha, founder of the Nath cult of North India, which thrived in the eight century A.D. There is also a reference of Shri Shiva Himself having installed the image of Shri Narasimha here for the worship of mortals in Kaliyuga, in "Manjula Mahathmya" of the "Sahyadri-Khand" in the "Skanda Purana". A whole chapter in the Purana is dedicated to the pilgrimage of a saint called Virupaksha, of the Gowda Saraswat Community to the holy shrines in the South "Inter alia", where it has been mentioned that the saint settled down in Manjeshwar and spent his last days there worshipping the idol of Lord Shiva and finally attaining "Moksha".

For many years since then, there is not much on record about the temple during the period when the temple fell into ruins, until according to the "Sthalapurana", one Ranga Sharma, a Gowda Saraswat Brahmin hailing from Kusasthali in Goa, on his way to Rameshwaram, halted at Manjeshwar. In one of his strolls in the nearby woods called "Sankamalae", the as per the sthala purana, he is said to have accidentally come upon the ruins of a temple which is linked to those of the Manjeshwar Temple. Ranga Sharma had a dream one night, in which Shri Shiva bade him to rebuild the temple and install the image of "Shesha" which was brought by Ranga Sharma from Goa. The "Shesha" is said to be a companion and ornament to Him (Shri Shiva). Ranga Sharma did as he was instructed, and the Temple was rebuilt. Also in Madhwavijaya, there is a mention of Shri Madhwacharya having spent, in the course of his tour, one of his "Chaturmasas" (period of retreat and meditation) at Kanwathirtha, a sea side settlement near Manjeshwar. Before recommencing his tour, he is said to have taken a bath in a sea during a Solar Eclipse and worshipped Shri Narasimha at the Manjeshwar Temple.

The idol of Shri Narasimha that exists in the temple today is of "Panchaloha" (Five Metals). It was installed in the place of the old one, in the twelfth Century A.D., This event marked the change of faith of the Gowda Saraswat Brahmins from "Shaivism" to "Vaishnavism" propagated Shri Madhwa Acharya. The "Pancha Ratra" type of religious service, one of the prescribed "Agamas" now observed in the Temple was introduced by Shri Raghavendra Thirtha the spiritual head of Gowda Saraswat Community. There is a strong belief that Shri Narasimha gave "Darshan" to the Swamiji. There is also a Mutt belonging to Kashi Mutt Samsthan nearby the Temple.

The Temple like many other ancient place of worship became a prey to the ravages of man and nature. In 1677, a cyclone is said to have destroyed certain parts of the temple. It was plundered by one Muhamed Ali, the king of Cannanore and immediately after that by a Maratha pirate, Angira in about 1755 A.D. In 1799, after the fall of Tippu Sulthan who had held sway over South Canara and with the following coming into the rule of the Ruler of Vittal, the latter looted it and carried away a large booty including a Temple - Chariot. Later on as a result of the representations made by the Gowda Saraswaths to the British authorities, the ruler of Vittal was apprehended and the possessions of the temple looted by him were restored to the temple. In 1804, it was restored by the Gowda Saraswath Brahmins and a new idol of Shri Narasimha known as Shri Bhadra Narasimha was installed by Srimad Vibhudendra Thirtha, the then head of the Kashi Mutt.

The idol of Shri Subramanya was installed in a declivity considerably lower than the surrounding area and full of serpent holes. The panoramic view of the shrine with hills on three sides and river Manjeshwar flowing by, is really enchanting to watch.

Shri N Purushothama Mallaya Secretary, Konkani Basha Prachar Sabha, Cochin is also a personality to be remembered for his unstinted efforts in getting recognition for Konkani Language by the Sahitya Academy.

Manjeshwar Shashti, the main festival of this temple is celebrated every year in the month of November/December on the sixth day of bright half of Margasheera month of the lunar calendar. It is associated with the popular Naga festival of God Subramanya,Skanda or Shanmuga. Hundreds of devotees pull the chariot which is decorated beautifully. It is the tallest among all GSB temples and is about 71 feet high. The chariot was built in the year of 1834. Usually the temple chariots have four wheels but this one has six. According to an old custom of giving alms, the temple distributes rice to Harijans on every Saturday as charity.

Ananth Yathri Nivas is a lately constructed guest house with 27 rooms and two dormitories. Rooms can be booked at the temple office in advance by letter, e-mail or phone. A nominal amount is charged.

Besides being a religious center, the Temple has proved itself a guiding light of learning and social welfare. It runs a full - fledged high school, an elementary school, a nursery school, a free lodging house. A library with books on religion and philosophy, a wedding hall with all amenities for pilgrims and a hall called Ananda-Kalyanamantapam for conducting Marriages, Upanayanams, Annaprasanam and other Socio-religious functions are provided by the temple management. In addition to these, it offers scholarships for school and higher education. Special mention has to be made for free distribution of rice on Saturdays. Protection and welfare of cattle is also one of the activities the temple management manages. Today, it is the richest Gowda Saraswath Temple in the erstwhile South Canara District drawing pilgrims particularly from the area extending from Goa to Cape Comrin.