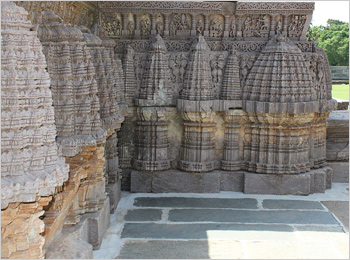 The Amruteshvara temple is situated in a village called Amruthapura. It is about 67 km to the north of Chikmagalur in Karnataka. The temple is an ancient structure, having been built in 1196 CE by Amrutheshwara Dandanayaka under the Hoysala King Veera Ballala II. 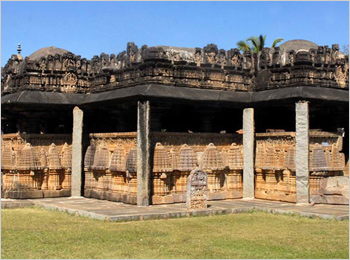 The temple is a built in line with the generic structure of Hoysala architecture. It has a mantapa that is wide open. The temple has an outer wall with unique circular carvings. The temple has one vimana and is considered an ekakuta and has a closed mantapa which connects the sanctum to the large open mantapa. The temple is a medium-sized Hoysala temple. It has vastu features that are more or less similar to the Veera Narayana Temple, Belavadi in mantapa structure and size. The open mantapa has 29 bays and the closed mantapa has nine bays. This has a side porch that leads to a separate shrine on the south side. The shrine is square in shape has an original superstructure (shikhara) which is adorned with sculptures of Kirtimukhas (demon faces), miniature decorative towers (aedicule). Below the superstructure, the usually seen panel of Hindu deities is absent. The base of the wall has five mouldings which according to art critic Foekema is an "older Hoysala style". The Sukanasi, the tower on top of the vestibule that connects the sanctum to the closed mantapa (the Sukanasi appears like the nose of the superstructure), has the original Hoysala emblem of "Sala" fighting the lion.

The rows of shining lathe turned pillars that support the ceiling of the mantapa is a Hoysala-Chalukya decorative idiom. The mantapa has many deeply domed inner ceiling structures adorned with floral designs. The outer parapet wall of the open mantapa has a total of hundred and forty panel sculptures with depictions from the Hindu epics. Unlike many Hoysala temples where the panels are small and carvings in miniature, these panels are comparatively larger. The Ramayana is sculpted on the south side wall on seventy panels, with the story proceeding quite unusually, in anti-clockwise direction. On the north side wall, all depictions are clockwise, a norm in Hoysala architectural articulation. Twenty five panels depict the life of the Hindu god Krishna and the remaining forty five panels depict scenes from the epic Mahabharata. Ruvari Mallitamma, the well known sculptor and architect is known to have started his career here working on the domed ceilings in the main mantapa. The large stone inscription near the porch contains poems composed by medieval Kannada poet Janna who had the hororific Kavichakravarti (lit, "emperor among poets") 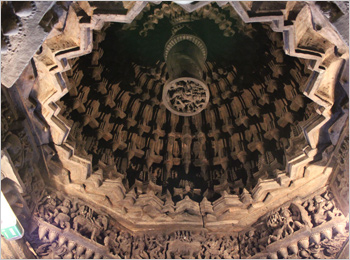 There is a Saligrama Shivalinga which is a trimurthi. It was brought from River Kandikevale in Nepal and is 300 years old. The deepa was lit by Mysore Maha Raja.

If children are poor in studies or facing any problem in gaining better education, visiting this temple is said to benefit them. As a mark of thanksgiving, people offer madalakki and sarees to the deity.

From Bangalore, get a bus to Chikmagalur and get down at Tankere. From Tankere get an auto or private vehicle to reach Amruthapura. Amruthapura is situated at about 4 kms from Tarikere.

The nearest railway station is at Tarikere.