The Amedha Temple is dedicated to Lord Vishnu and is located in Ernakulam, Kerala, India. 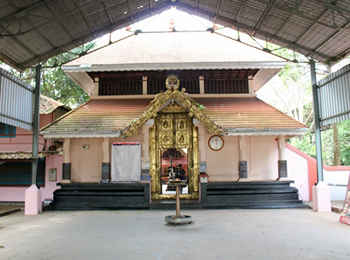 Situated on the banks of Vembanad Lake on the Tripunithura Vaikom route which is about 20 kilometres to the south of Ernakulam. the main deity is Sapthamathrukkal, namely: Veerabhadran, Ganapathy, Brahmani, Maheshwari, Kowmari, Vaishnavi, Varahi, Indrani and Chamundi. 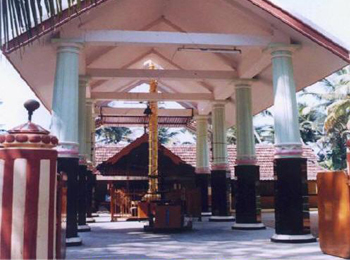 The shrines that are dedicated to Nagaraja and Nagayakshi are located in the North West and North East respectively. Towards North, one can see the shrine of Sree Maha Vishnu. The lamp originally lighted by Lord Parasurama is still in the 'Sreekovil'. The temple compound spans across 10 acres and is surrounded by a lot of trees and scented flowers. The chanting of Rig Veda, Yejur Veda and Sama Veda from the precincts of the 'Sreekovil' and the 'Snake Songs ' accompanied with single string veena from the premises elevate one to a higher mental plane, leaving behind all earthly concerns. The temple is owned and managed by the Ameda Mangalam family. 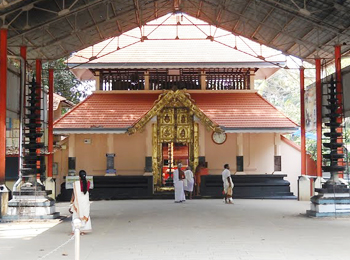 Giving more importance to Vaishnavi, Bhagavati seva is done for the first 12 days of the Malayalam month (Karkidakam). On the 41st day of Mandala Pooja( Nov-Dec) an offering named Guruthy is done in 12 large vessels giving more importance to Chamundi. Karthika payasam is offered to Vaishnavi on the day of Karthika star. Couples visit the temple continuously for one year on the Karthika star and offer Karthika payasam for child birth. Sarpabali and Ashtanagapooja are the two most important offerings in the Ameda temple. The offerings are done in order to avoid the ""Rahudosha"" and for attaining ""Sarpapreethi"". These offerings will be conducted only on suitable days selected from from Malayalam Calendar( Panchangam). The offerings can be booked early in Ameda temple counter. This offering will be conducted only during evening time, from 6:00 pm to 8:30 pm. The Kindi Eriyal and Poovattaka Kamizhthal is one of the important offerings at Ameda temple. Kindi Eriyal and Poovatta- Kamizhthal are offered to the Sapthamathrukkal. Both these offerings are for getting the blessings of the God for Child Birth. Guruthy Pooja is done to Chamundi, during the 41 Days of Mandala Pooja. The main aim of the Guruthy Pooja is Sathru Samharam (Destruction of enemies). Only on the 41st day of Mandala Pooja, (Nov to Dec), Guruthy pooja is done in 12 large vessels. During the rest of the days Guruthy pooja is conducted only in a single vessel.Guruthy pooja is conducted after the Athazha pooja,(final pooja of the day). After Guruthy pooja no one is allowed to enter the temple on that day. On the 41st day Guruthy pooja offered to Nagayakshi also. The Vedic Scholars of Kerala stay here and perform the Murajapam for about 4 to 5 days in the temple.Murajapam means chanting of Vedas inside the ""Sreekovil"". This is done mainly for the prosperity of the temple and that of the devotees.Murajapam is conducted for 2 to 3 times in a year. Pulluvan Pattu is an offering that is mainly made for ""Sarpapreethi"".The people in the ""Pulluva"" caste, residing near to the temple,do this. The elder men in the Pulluva family are Shri Sankaran and Shri Shanmukhan. These are the people who do this job for generations. Kalasham Dravyakalasham is conducted in every year. This is one of the thantric ritual to the sapthamathrukkal.Although all Aayilaya Nakshatras are good for worshiping the serpents (Sarpaaradhana), the ones coming in the months Kanni, Thulam,Vrishchikam and Meenam (Malayalam Months) are the more sacred and important. In the English calendar, it is coming in the months of September, November and April .Besides the above 4 days, 'Pathamudayam' and 'Nagapanchami' are the other important days for worshiping. During these days a huge crowd of devotees assembled in the temple.

The temple has a pooram festival in the Meenam month(March-April) . The flag for festival is hoisted on the Makeeram (Mriga seersham) day. The important festival days are on Ayilyam(Ayilya Darsanam) , Uthsava (festival) Bali on Makam , Valiya Vilakku(Big lamp) or Palli vetta(Royal hunt ) on Pooram and Arattu (ceremonial bath of the deity) on Uthram days. The arattu would be only performed by the member of The Amedu Mangalam family (Namboodiris in charge of the worship of the temple ) or the Vadakkan Puliyannor Namboodiri who is the Thanthri of the temple. This would be performed every day during the festival after the first worship of the temple(Usha Pooja) in the temple tank and in the evening on the main Arattu day (Uthram) , On this special day all the three doors (instead of two) of the sanctum sanctorum are opened and there would be five times worship in the temple instead of the usual three times worship. The only other day when this door opened is on the Mandala Guruthi pooja performed on the 41st day of the Mandalam.