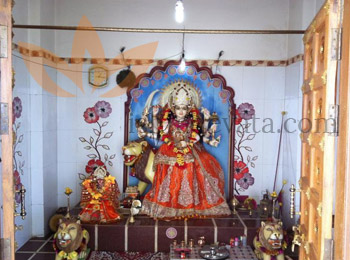 The Maa Ambika Shaktipeeth is situated in Rajasthan, near Bharatpur. The temple is located in Bairat village, Virat Nagar about 90 km from Jaipur.

The Ambika Shakti Pith Temple is dedicated to goddesh Ambika. It is among the 51 Shakti Peeths of Maa Sati. It is said that, the left leg Maa Sati fell here when lord Vishnu in order to relieve lord Shiva from grief of losing his wife Sati, used his ‘Sudarshan Chakra’ to incise maa Sati Body. Then, at the place of fall of left leg, this temple was constructed. The idol of maa Sati is called as ‘Ambika’ and the lord Shiva is worshipped as ‘Amriteshwar’.

According to legend, Daksha who is the father of Goddess Sati insulted the lord Shiva and Shri Sati. He did not invite them to Daksha Yoga. Goddess Sati did not get the permission from lord Shiva and went to the Daksha Yoga. Her father insulted a lot. So goddess Sati sacrificed herself in the Yogna. On hearing this, lord Shiva got angry and he started to dance for destroyed this universe. To prevent this, lord Vishnu Sliced the body with his Chakra. It was placed in 52 different parts of the world. In this temple goddess sati’s left leg was placed, which was called as ‘Nalhati’ (Nala – throat).

Navratri is a major festival here. Navratri are celebrated for over 9 days, with some people not eating any type of food that is derived from the soil for these nine days. Special ceremonies and rituals are carried during these days. Another festival that is celebrated with great enthusiasm is the ‘Shivaratri’ and during this day, people keep fast, pour milk on the Shiv Lingam and offers ‘Bail’ (A type of fruit) to the god idol. People (Almost every day) offer their offering to the god in form of fruit, milk, homemade sweets etc. Brij Mahotsav is celebrated in the month of Feb- March. Gangaur festival is celebrated in March- April. Teej festival is held in July- August, besides an exhibition held during Navaratri in the month of Sep- Oct. Makar Sankranti, Sharad Purnima, Deepawali, Somvati Amavasya, Ram Navami are some of the other important festivals being celebrated here.

People pray to the Goddess for fulfilment of their wishes and removing domestic issues.

Kaila Devi Temple, situated on the banks of the Kalisi river 23 Kms. From Karauli district of Rajasthan. Dedicated to the tutelary deity – Goddess Kaila Devi, Kaila Devi temple is a marble structure with a large courtyard of a checkered floor. A fair known as Kaila Devi Fair is held every year in the month of Chaitra(march), starting from Chaitra Budi 12 and lasting for a fortnight.

Birla mandir, Jaipur as one of the several Birla Mandirs all over the India. Also, this temple is sometimes known to as the Laxmi Narayan Temple

The nearest airport is in the Jaipur and national flights as well as international Flights are available from here.

Several direct trains are available to Bharatpur railway station.From Bharatpur Railway station you have to board local train, to reach Maa Ambika Shaktipeeth.

There are many private and public vehicels available to reach Ambika Shakti Pith Temple Virat Nagar.