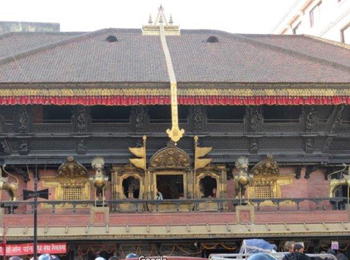 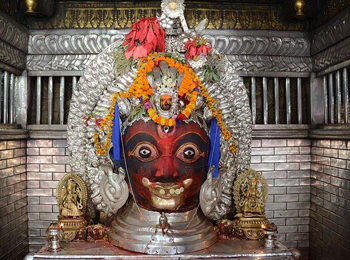 Aakash Bhairav is often depicted in Buddhist iconography by a large blue head with fierce face, huge silver eyes and a crown of skulls and serpents. The deity head resides on a silver throne that is carried by lions, accompanied by Bhimsen (Bhima) and Bhadrakali on either side. The idol face is understood to represent the mask that King Yalamber wore on his way to the Kuruktsetra. The Indrachok idol is somewhat milder in demeanor than many of the Buddhist idols. Lord Aakash Bhairav, the 'god of the sky', is also regarded by Nepalis as a progenitor of the Maharjan caste, especially the peasant groups. Pictured on Aakash Bhairav's head is an image that the Buddhists identify as Buddha, and the Hindus identify as Brahma, thus making the idol of Yalamber/Barbarika/Aakash Bhairav worshipable by all.

The Akash Bhairab is said to be the kirati king Yalambar himself. Legend has it that, Yalambar was the first king to establish this nation and even extended towards Tista in east and Trishuli in west. He is believed to have gained the powers through tantric worshipping. During the famous battle of the Mahabharat, the first king of Kirat dynasty, Yalambar in disguise of Bhairab, went to the battlefield to help the losing party. When Lord Krishnaheard of it, he promptly chopped Yalambar’s head, which reached Kathmandu by sky, hence the name, sky god or the Akash Bhairab.

It is taken out once a year on the occasion of Yenya Festival and is blessed by the Kumari  — the living goddess who lives in the nearby Kumarichok. This ceremony is held in the month of August/September In the period of ceremony large number of prayers come to visit the Aakash bhairav. During the ceremony prayers offers peda (sweets made from milk), flowers, money and several others things. We could have witnessed the late dynasty exchanging the swords with that of Akash Bhairav.

The traditional Akash Bhairav Puja is accompanied by Upasana and Anusthan. Sacred water, sandalwood, flowers, fruits, incense and naibedya are some of the offerings for this puja. Legend has it that worship of the Bhairav is usually a mark of safety and strength. In the Nepali imagination, the Akash Bhairav symbolizes protection and goodwill for the nation and its people.

Religion, nation, people, belief, faith and traditional thanksgiving are all interwoven in this manifestation of Bhairav worship. The Akash Bhairav is also believed to be the jeevan tatwa. Culturalism and culturality are integrally bound in Bhairav worship and the temple itself. It stands as a grand testament to a cultural personification of Upasamhar. For eight days during the Indra Jatra, celebrations in the temple consist of adorning the temple and the deity. This is followed by the Tantrik Puja, the Sagun Puja and the Kal Puja. The worshipper and the deity are held together in a uniquely 'reciprocal' dynamic. In September 2007 Nepal's state-run airline confirmed that it had sacrificed two goats to appease Akash Bhairab, whose symbol is seen on the company's planes, following technical problems with one of its aircraft.

The only international airport in Nepal is Kathmandu’s Tribhuvan International. There is really no railway system in Nepal but you can reach any of its bordering towns via the Indian Railway System. A popular way of entering Nepal is at the border with India. There are a couple of roadway bus options.