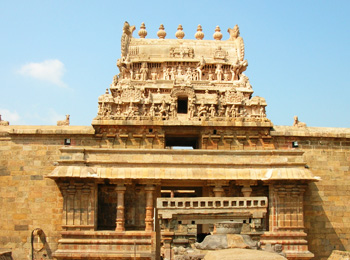 The Airavatesvara Temple is situated in Darasuram in Tamil Nadu. This temple was built by Rajaraja Chola II in the 12th century CE. It is a UNESCO World Heritage Site.

This temple is a storehouse of art and architecture and has exquisite stone carvings. This temple is said to have been built with nitya-vinoda, "perpetual entertainment", in mind. The temple starts with a mahadwara or a main entrance on the east. The vimana (tower) is 24 m (80 ft) high. The temple consists of a sanctum without a circumambulatory path and axial mandapas. The front mandapa known in the inscriptions as Rajagambhiran tirumandapam. The south side of the front mandapam is in the form of a huge chariot with large stone wheels drawn by horses. The pillars of this mandapa are highly ornate. The elevation of all the units is elegant with sculptures dominating the architecture. To the east of the inner court lies a group of well-carved buildings, one of which is the Balipita ('seat for sacrifice'). The pedestal of the Balipita adjoins a small shrine which contains an image of Ganesha. The pedestal has a set of 3 finely carved set of steps on the south side. Striking the steps produce different musical sounds (seven basic notes of music). In the south-west corner of the court is a mandapam having 4 shrines.

One of these has an image of Yama. Adjoining this shrine are large stone slabs sculptured with images of the sapthamathas (seven celestial nymphs). The construction of a separate temple for Devi, slightly later than the main temple, indicates the emergence of the Amman shrine as an essential component of the South Indian temple complex. There are various inscriptions in the temple. One of these records the renovation of the shrines by Kulottunga Chola III. The north wall of the verandah consists of 108 sections of inscriptions, each containing the name and description and image of the 63 Saivacharya (Saivite saints) listing the principal events in their life. This reflects the deep roots of Saivism in this region. Other important sculptures of the temple are the 108 Devara Othuvars who sung in the temple during the time of Raja Raja II. There are sculptures for river goddesses like Cauvery, Ganges, Yamuna, Godavari and Narmada. Another inscription close to the gopura, records that an image was brought from Kalyani, then known as Kalyanapura by Emperor Rajadhiraja Chola I after his defeat of the Western Chalukya king Someshwara I, his sons Vikramaditya VI and Someshwara II his capture of the Chalukyan capital.

Music of the Stones

The most enchanting, though, are the musical notes that rise from the tread stones inside the Nandi enclosure in front of the Airavatheeswara temple. They are melodious testimony to the superb engineering skills of master craftsmen of a bygone era.

This temple was added to the list of Great Living Chola Temples in the year 2004. The Great Living Chola Temples includes the Brihadeeswara Temple at Thanjavur, the Temple of Gangaikondacholisvaram at Gangaikonda Cholapuram and the Airavatesvara Temple at Darasuram. All of these temples were built by the Cholas between the 10th and 12th centuries CE and have a lot of similarities.
Sthala Theertham: Yamatheertham
Stalavriksham: Vanni

The temple is dedicated to Lord Shiva. Shiva is known as Airavateshvara because he was worshipped at this temple by Airavata, the white elephant of the king of the gods, Indra. The main deity's consort Periya Nayaki Amman temple is a detached temple situated to the north of the Airavateshvarar temple. This might have been a part of the main temple when the outer courts were complete. At present, it stands alone as a detached temple with the shrine of the Goddess standing in a single large court.

A rare sculpture of Shiva as Sarabeswara moorthy only found on very few temples around the world. Special Poojas were performed on every Sunday during Raghu Kalam period i.e., 4:30 to 6:00 PM.

Airavatham is an elephant (white in colour) and is a vehicle of Indra. It was cursed by sage Durvasa to lose its shining white. Airavatha came to his temple and got its original colour after worshiping the Lord. Hence the deity came to known as Airavatheeswara (the protector or the elephant). It is believed that once Yama was suffering from burning sensation all over the body due to the curse of a saint. He worshiped lord shiva here and took a bath in this temple’s theertham and performed pooja. Hence this theertham is called as Yamatheertham.

Palaiyarai was ancient temple city and the Capital of the Cholas. King Raja Kambeera Mamannan, Raja Raja Chola II (1146 A.D. to 1172 A.D) changed his capital from Gangaikonda Cholapuram to Palaiyarai and renamed it as Raja Raja Puram (at present it is Darasuram). There were 1000Thaligal (temples) in palaiyarai. There were 4 padai veedus (Military Camps) on all the four directions of the Capital. Thalicherippendirgal were appointed by the king to develop fine arts especially music and dance in the temple during festival occasions. King Raja Raja II constructed in his name a beautiful temple called Raja Rajechuram (at present Airavatheeswara) in1160 A.D. to 1162 A.D. This Raja Rajechuram (Raja Rajeschuram – Tharechuram – Darachuram -Darasurm) became Darasuramat present.

One may visit the temple at any time, and all times are equally good.