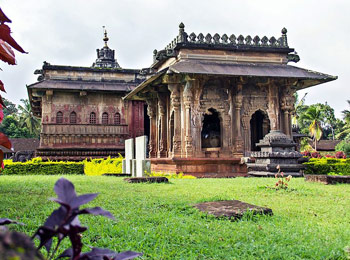 Ikkeri was the capital of Keladi Nayakas, a dynasty founded at Keladi in 1499. The name ‘Ikkeri’ in Kannada means two streets. The Nayakas of Ikkeri ruled from 1540 to 1763. This town is located in Shimoga district of Karnataka. The Aghoresvara temple has Lord Shiva as its presiding deity. The word ‘Aghoresvara’ means “The lord of 14th night of the darker half of the month of Bhadrapada”, this is to honor the good deeds performed by Lord Shiva in protecting the universe.

The central shrine is dedicated to Aghoresvara temple while the shrines next to it are dedicated to Ganesa and Subramanian. The same compound houses a shrine dedicated to Goddess Parvathi/Akhilandeswari, consort of Lord Shiva. The vehicle of Lord Shiva, Nandi is housed in an open mandapa made of stone. This sculpture is huge and is made of white spar.

The temple is a blend of Hoysala and Dravida style. This symmetrical temple was built by Vengayya without too much decoration. This large temple is constructed facing north and has lofty roof and doorways ornamented in the east, north and west directions. The north doorway is the best constructed one with two elephants on either side of it. Its Muka Mandapa is constructed with black basalt stone and consists of 6 pillars. The temple has a magnificent entrance to the Garbhagriha, which has a giant pedestal occupying around three-fourth of the entire area. This pedestal has around 32 seated female figures. Its stone ceiling has geometrical patterns inscribed on it.

There are a number of carvings and sculptures found on the temple walls such as figurines, old Kannada manuscript, sculpted elephants and erotica among others. There are some stone pillars depicting a mythological animal being ridden by a human. While the sculptures on the outside are constructed in Hoysala style, the Vijayanagara style of building is found in its interior.

The temple was constructed in the 15th century with a blend of Hoysalas, Vijayanagara and Chola style of architecture. The temple tower is a standing example of the in-between style. In an account by Italian traveler Pietro Della Valle, he describes a temple festival during his visit in the Keladi Nayakas period. The festival involved women dancing to the beats of Dandiya or Kola sticks. The only reminder to the Nayakas era is this temple dedicated to Aghoresvara. History says that this temple was ransacked by Tipu Sultan during an invasion on Nayakas of Ikkeri.

Shimoga has its own Domestic Airport named as Shimoga Airport, roughly 10 min. drive from city. It is well connected to New Delhi and Mumbai via Jet Airways, Air India and Spice Jet. The nearest International Airport is Mangalore Airport, roughly 195 Kms from Shimoga city. Frequent Flights to various national and international destinations such as Hyderabad, Abu Dhabi, Bahrain, Kozhikode, Bangalore, and Chennai take off from here.

Shimoga has its own Railway Station named as Shimoga Nagar Railway Station which is connected to the major cities of Karnataka and other state like Mangalore, Hampi, Bangalore, Pune and Mumbai.

Ikkeri is located 93 kms from Shimoga and 3 kms from Sagar. The town is well connected by road; you can hire auto rickshaws from Sagar to Ikkeri and back. Buses are also available till Sagar.