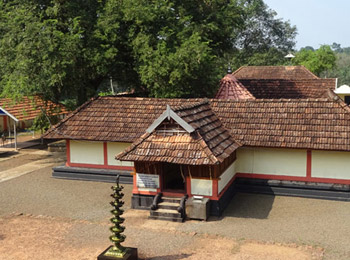 The temple of Adithyapuram Surya is situated near Kaduthuruthy in the district of Kottayam, Kerala. The shrine is located just 200 m (0.20 km) on the main highway heading towards Vaikom. It is at a distance of 3 km from Kaduthuruthy, 17 km from Ettumanoor and 16 km from Vaikom. This is the lone Surya shrine (Sun Temple) in Kerala. Lord Surya is revered as an updevata (sub deity) in some shrines.

The 'Sreekovil', where the chief deity is installed, in the temple is in of a circular shape. The deity is seen facing west in a meditative posture. The idol of the chief deity, Lord Surya, is made of a unique kind of stone that has the ability to absorb oil. 'Abhishekam' or the holy bathing of the vigraha is done in the morning followed by the abhishekam of water. It is actually a marvel that there is no trace of oil after sprinkling water on the idol. The upper right hand of the deity is seen holding the 'Chakra' (rotating disk) and the upper left hand with the 'Shankha' (conch) while the lower right and left hands are in a 'tapo mudra' posture. A remarkable fact is that there are no 'Navagraha' pratishtas done here.

Durga Devi is also another chief deity here now as it is believed that Surya deva got all the powers (in the early morning Surya Deva has the powers of all other gods) from Devi through unceasingly chanting the Durga Mantra. According to the sthala purana, at the commencement of creation of this universe Lord Surya, the Sun god, alone was visible, while the other Gods and Goddesses were not visible. But he had the same powers that the other deities had. This made him unhappy. He started doing rigorous penance on Devi Mahamaya till she manifested before him. Please with the penance of the Sun god, Devi blessed Lord Surya and granted him the boon that 6 hours till sun rise he will be bestowed with powers of the other deties also. The installation of the idol of Durga, facing east, was performed in the same sanctum sanctorum. The temple since than had been renovated and became popular after the Durga prathishta. Sastha and Yakshi are the other upadevas or sub-deities in this shrine.

According to the Sthala Purana the idol of Surya Deva was consecrated way back in 'Tretayuga'. Apart from this information there are not much factual evidences supporting the origin of the shrine. Once a Nambudiri, belonging to the 'Kapikkadu Marangattu Mana', performed penance (Tapas) to please the Sun God 'Adithya'. Pleased by the devotion, Lord Surya manifested before him and directed him to instal an idol in the place. Since that time onwards, regular pujas and rituals were performed till date. At present, descendants of that Nambudiri hold the tantric rights of the shrine.

Sundays are considered auspicious for worshipping Lord Surya in this temple. Last Sunday of the Malayalam month of Vrischikam (October/November) and Medam (May/June) are treated as more auspicious and special rituals and rituals like Kavadi abhishekam are done. On this day at least one of the fmily members from the Marangattu family will take the kavadi for the abhishekam, which is a must. There will be an enormous crowd in the shrine on these days. For both Karkkidaka Vavu and Pathamudayam devotees from distant areas visit the temple.

Raktha Chandanam (Red Sandalwood paste) is given as prasada (homaged and blessed ritualism material given to the devotees). It is believed to have curative effect to incurable illnesses. A blend of black dust of the lamp burning inside sanctum sanctorum and ghee is also given to devotees as prasada for curing eye sore.

Male devotees are expected to wear Kerala Mundu, which is also known as Veshti or Dhothi and are not supposed to wear shirt while inside the temple. But there is no dress code for women, as they can wear any traditional dress like Saree, Churidar, Salwar Kameez or Skirtz.

The main ritual is Abhishekam (bathing). In the first stage the Abhishekam is performed by oil and Abhishekam by water followed. It is a surprise that after pouring of water for Abhishekam there will be no trace of oil on the idol. All trace of oil disappears because the idol is made of a particular type of stone that absorbs oil.

The closest airport is Cochin International Airport is at a distance of 47 km.

The temple is just four km from Kuruppanthara in Ettumanoor-Vaikom Road.