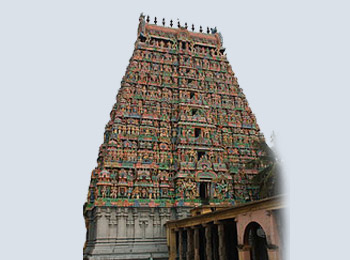 Adi Kumbeswarar Temple is a Hindu temple dedicated to the deity Shiva, located in the town of Kumbakonam in Tamil Nadu, India. Shiva is worshiped as Adi Kumbeswarar, and is represented by the lingam. His consort Parvati is depicted as Mangalambigai Amman. The presiding deity is revered in the 7th century Tamil Saiva canonical work, the Tevaram, written by Tamil saint poets known as the Nayanmars and classified as Paadal Petra Sthalam.

Adi Kumbeswarar is the presiding deity of the temple and the shrine is located in the centre. Kumbeswarar is in the form a lingam believed to have been made by Shiva himself when he mixed nectar of immortality and sand. Manthrapeeteswari Mangalambika is his consort and her shrine is present parallel to the left of Kumbeswarar shrine. The temple has a colonnaded hall and a good collection of silver vahanas (sacred vehicles used to carry deities during festival processions) Beyond the flagstaff, a hallway whose columns feature painted brackets representing yali (a mythological creature) leads to the gopuram. The Navarathiri Mandapam (Hall of Navrathri celebration) has 27 stars and 12 rasis (constellations) carved in a single block. The idol of Subramanya having six hands instead of 12, stone nagaswarams (pipe instrument) and Kiratamurti are main attractions of the temple.

Lord Shiva announced that the Mango brought by Sage Narada would be presented to one who wins a marathon round of the whole world. Lord Vinayaka circumambulated His divine parents Shiva and Parvathy and established the fact that world means Father and Mother and going around them fulfilled the condition of competition. He won the mango. Based on this philosophy, the prakara structure of the temple covers both Lord and Mother shrines. In other temples, the prakaras are separate. There is no abishek to the presiding deity. The Linga is broad in base and sharp at the top as a needle point. The stones of the temple have musical tones. There is a lion sculpture in the Navarathri Mandap holding long stones on its head.

The Pottramari tank – tank with golden lotus flowers – is in front of the temple. Those coming for the bath in Mahamagam tank bathe in this tank also. After their bath in the former tank, it is said that the Navakannikas bathed in this tank also. Hence, this is practiced. Kumbamuni Siddha is in the outer corridor of the temple. Devotees pray here for relief from the adverse aspects of planets.

Mother Goddess is praised as Mangala Nayaki and Mantra Peeta Nalathal. Sage Tirugnana Sambandar in his hymns had praised Mother as Valar Mangai. Lord Shiva parted half of His body with Mother Parvathi, He had also parted 36 crore of His Mantra Shakti-power with Her. Mother also has Her share of 36 crore Shakti and the share of Lord makes it to 72 crore. Thus Mother is praised as Mantra Peeteswari. Of the 51 Shakti Peetas, this the first place. She wears the yellow sari with turmeric on the face and the Kumkum on the forehead. She glitters with all mercy.

The Mahamaha tank measures 3 acres situated in the heart of the Kumbakonam town. During the Pralaya floods, when nectar flowed from the pot, Lord Shiva made it fall in a pit on earth. This pit is the Mahamagam tank. The Kumbakonam Mahamagam festival is celebrated once in 12 years on a Poornima-full moon day when Jupiter enters Kumba-Acquarius and Sun Simha zodiac signs. On this day, other holy rivers Ganga, Yamuna, Godavari, Narmada, Saraswathi, Cauvery, Kumari, Bayodhini and Sarayu also bath in the tank to cleanse themselves of their sins. It is also believed that those bathing on this day in the tank, takes the benefit to seven families related to them.

Lord Vinayaka of the temple is praised as Aadhi Vinayaka as He had arrived here well before Lord Shiva and Mother Parvathi to the place. Lord Muruga had received the Mantra Upadesa from Mother Mantra Peeteswari before waging the war against Surapanma. He is praised by Saint Arunagiriar in his Tirupugazh hymns. Lord Shiva came here in the guise of a hunter (Kiradha) and broke the nectar pot here. Special pujas are dedicated to Him on the Magam star days by devotees to realize their wishes.

When the world was facing destruction due to the devastating tsunami, Lord Brahmma approached Lord Shiva to know wherefrom He had to restart creation. Lord Shiva suggested that Brahmma make a magic pot with the sand collected from various sacred places and float it in the flood water and also taught the procedure of leaving it on the water. The pot stopped at a place. Lord Shiva shot an arrow on the pot. The nectar spilled and spread on all directions. That nectar mixed with the sand and became a Linga. This Linga is Kumbeswarar.

Theerthavari festival is celebrated in the Mahamagam tank on Masi Magam (February-March). Sabthasthanam festival in Chithirai (April-May) when the Lord and Mother visit 7 places at a distance of 20 kilometres. Tirukalyanam (wedding festival) in Vaikasi (May-June), Tirumanjanam in Aani (June-July), Aadi perukku and Aadi Pooram (July-August), Panguni festival (March-April) with special pujas, Butter pot festival on the Aswathi star day in Masi (February-March), on the 8th day, and the procession of Panchamurthis are the festivals grandly celebrated in the temple. Masimagam is the biggest festival in Tamilnadu.

How to Reach Adi Kumbeswarar Temple

The nearest airport is located at Tirchy Airport. The nearest railway station is Kumbakonam. The temple is in the heart of Kumbakonam town.