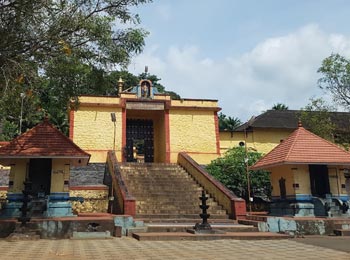 The managing divinity of this temple is Lord Ayyappa. The symbol introduced in the temple is accepted to be the most established vigraha introduced by Parasurama. The temple cherishes Lord Sree Dharma Sastha alongside his two consorts Poorna and Pushkala in Grihasta Ashram (as a family man). The icon of Swamy Ayyappan in the temple is known as "Rudraksha Sila" and is known for its inexplicable mending power for snake venom. The left hand of the icon of Ayyappa at Achankovil Temple holds sandalwood glue (Chandan) and sacred water (Tirtha). The chandan and Thirtha are said to have therapeutic properties for curing harmful snake nibbles.

The Thiruvutsavam (yearly celebration) and Mandala pooja is facilitated in the Malayalam month of Dhanu (December to January) for 10 days and celebrated in great style. The Thiruvabharanam (holy trimmings) parade to the temple by means of Punalur, Aryankavu, Shenkottai and Tenkasi is another fascination. Pushpabhisheka is led on eighth of Makaram.

Revathi celebration is facilitated amid the times of January and February. The fundamental offering of the divinity duing this celebration is Karuppanootu to pacify Karuppaswami, an awesome companion of Ayyappa. The Therottam (chariot celebration), Karuppanthullal and Chapparam parade hung on the ninth day of celebration are especially like the ceremonies in Tamil Nadu.

The Achankovil Sastha Temple is famous for curing poisonous snake bites. According to Hindu belief the Planet Saturn has much effect on humans and bad effects known as 'Sani Dosham' will be removed or the power of its bad effects will be lessened by praying and worshiping at Achankovil Dharma Sastha temple. Lord Sastha / Ayyappa is considered as the God governing planet Saturn.

Thiruvananthapuram international airport is about 140 km and Cochin international airport about 180 km. The nearest railway stations are at Thenmala, Kottarakkara and Punalur. The temple is located near the banks of Achankovil river in the dense forest regions of eastern Kollam, about 50 km from Punalur, 85 km (53 mi) from Kollam and 62 km (39 mi) from Kulathupuzha via Aryankavu, Thenmala and Shenkottai.

Different Routes to Reach the temple