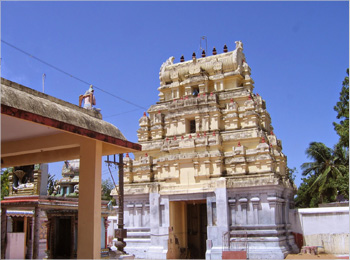 Sri Abhi Muktheeswarar temple is located in the city of Manakkal ayyampet, Tiruvarur, Tamil Nadu and is about 1000-2000 years old. One of the 276 Thevara Paadal petra sthalams.This Shivastalam is a maadakkoyil at an elevation surrounded by 12 other shrines in the vicinity. Karaveeram and Talaiyalankadu are the Shivastalams in close proximity. Peruvelur is regarded as the 92nd in the series of Tevara Stalams in the Chola Region south of the river Kaveri and is on the route to Kumbhakonam from Tiruvarur.One of the 78 "Madakkoils", based on a rise, by Ko Chengat Chola Nayanar so elephants can not enter the sanctum.  Subramanyar adored Lord Shiva here thus the spot was called Velur. Vishnu is said to have appealed to Shiva to shed his Mohini shape and return to Vishnu structure. There is a different temple for Perumal inside the temple.  Gowtama and Bhringi Munis are additionally accepted to have venerated Shiva here Kattur Ayyampet is the authentic name Arunagiri nathar sang Thiruppugazh on this Murugar. This is a little bit of the Kailash that was tossed separated in the battle between Aadhi seshan and Vayu Bhagwan. Sambandar and Appar formed the Pathigam. Nataraja Saba is available in a mandapam of Wovval nethi structure. This small temple celebrates Kartikai Deepam each year. Two worship services are offered here each day. 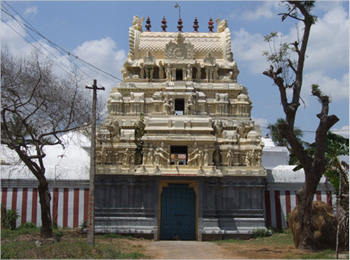 A parihara sthalam for Sukran; people with debt burden worship the Lord here People with stammering difficulty pray here to get rid of their problem.

There are regular trains easily available to Kumbakonam from other major cities of the country.
Railway Station(s): Kumbakonam (KMU)

There are regular buses from other major cities of the country to Kumbakonam.
Bus Station(s): Kumbakonam