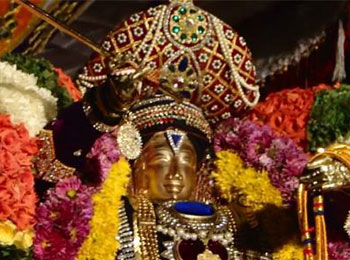 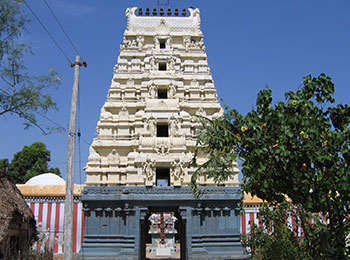 Thirumangai Azhvaar has 10 Pasurams in praise of the lord who is in standing posture facing the East. There is a jackfruit tree behind the main sannadhi and there is a big conch (shanku) like formation on it that is said to have formed naturally when it was being planned to cut down a portion of the tree for renovation purpose. The formation is covered with turmeric for identification. 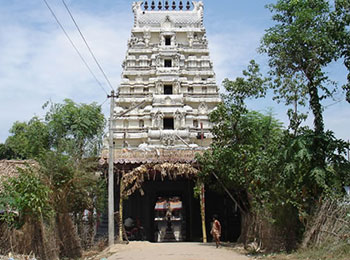 According to mythology, this is the region where God Vishnu took the form of a Boar (Varaha Avatharam) and prevented the Earth from sinking into the ocean. Legend goes that Hiranyaksha, a demon, was granted a boon that he would neither be killed by a man, beast or God. Emboldened by the boon, Hiranyaksha embarked on a spree of destruction and pushed the Earth into the ocean. He even troubled Brahma, his benefactor. While Brahma was fast asleep he stole the four Vedas from him. The Devas begged God Vishnu to put an end to the violence. God Vishnu then took the Varaha Avatharam and lifted the Earth out of the ocean using his tusks. He then slayed Hiranyaksha and rescued the Vedas from him. Since he saved the world from destruction in this manner, he is referred to as Vaiyam Kattha Perumal or Jagatrakshakan.

Vaiyam Kattha Perumal Temple at Thirukoodalur is considered to be one of the 108 Divya Desams. This temple is popularly known now as Aduthurai Perumal Koil. This is not to be confused with the Aduthurai near Thiruvidaimarudhur. This temple is the Kethu parihara sthalam. The presiding deity is known as Vaiyam Kattha Perumal and his consort here is Padmasanavalli. The sacred tree (also called the Sthala Vruksham) at this temple is the Jackfruit tree. There is a huge formation on the tree that resembles a sangu (conch). The presiding deity here is seen with his discus prepared to leave his hand. He is also referred to as Prayoga Chakradari. There was once a king by the name Ambarishan who was a devout Vaishnavite. In his devout adoration of God Vishnu, he neglected his kingdom. As a result, he lost his kingdom to the neighbouring king. However, the king continued his service to God Vishnu. Once while he was deep in meditation, Durvasa Maharishi came to meet him. The king did not notice the sage as he was immersed in his prayers. Durvasa Maharishi felt slighted by this act of King Ambarishan and cursed him. Disturbed, Ambarishan prayed to God Vishnu seeking his help. The God was furious with Durvasa Maharishi for punishing his devotee for no fault of his.

Mahavishnu prepared to launch the discus intending to behead the sage. However, the sage realised his folly and apologised to the God. As a mark of gratitude, Ambarishan built a temple at that spot where the current Aduthurai Perumal Koil is located. The God is called Ambarisha Varadar after King Ambarishan. Devotees believe that when they pray at Aduthurai Perumal Koil they are protected by the discus of God Vishnu. The presiding deity is found in a standing posture in this temple. The Goddess Padmasani is also called Pushpavalli. The temple tank is called Chakra Theertham and the Vimanam is Sutha Satva Vimanam.

The temple priests perform the pooja (rituals) during festivals and on a daily basis. As at other Vishnu temples of Tamil Nadu, the priests belong to the Vaishnavaite community, a Brahmin sub-caste. The temple rituals are performed six times a day: Ushathkalam at 7 a.m., Kalasanthi at 8:00 a.m., Uchikalam at 12:00 p.m., Sayarakshai at 5:00 p.m., Irandamkalam at 6:00 p.m. and Ardha Jamam at 7:30 p.m. Each ritual has three steps: alangaram (decoration), neivethanam (food offering) and deepa aradanai (waving of lamps) for both Jakath Rakshaka and Padmasavalli. During the last step of worship, nagaswaram (pipe instrument) and tavil (percussion instrument) are played, religious instructions in the Vedas (sacred text) are recited by priests, and worshippers prostrate themselves in front of the temple mast. There are weekly, monthly and fortnightly rituals performed in the temple. The Brahmotsavam festival celebrated in the Tamil month of Vaikasi (May–June) and Vaikunta Ekadasi celebrated during the Tamil month of Margazhi (December–January) are the major festivals celebrated in the temple. Srisukta Homam, a religious practice, is performed in the temple with 108 lotus leaves on full moon days

TheAs the Devas came together at this place requesting the Lord to kill the Asura Hiranyaaksha, this place has come to be called Koodalur(where people come together)

Tirukudalur is 22 km from Kumbakonam on the Tiruvaiyaru road. The temple is near the Aduthurai Perumal Koil bus stop. From Swamimalai, the temple is at a distance of 18 km.

The nearest rail head is at Kumbakonam

The nearest Air terminal is at Trichy