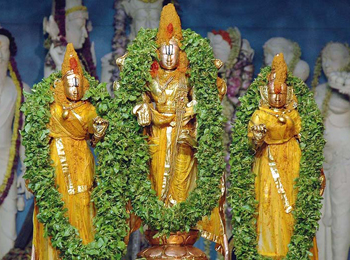 The annual Vasanthotsavam is performed in Tirumala on the auspicious days of Trayodasi, Chaturdasi and Pournami in the month of Chithirai (March/April) every year. According to the temple legend, the Vasanthotsavam Festival was started during the period of King Achyutaraya sometimes in the 1460s. This annual fete was believed to have been introduced by the king to mark the onset of the spring season. On these three days, the Lord and his Consorts are given an aromatic bath and the bath is believed to offer some relief to the deities from the scorching sun. This three-day festival starts with the ankurarpanam (sowing the nine kinds of seeds) ceremony conducted on the day of the Uttarabhadra star, a day before the commencement of Vasanthotsavam festival. Punyaha Vachanam (purification rites), vaasthu santhi (worship of deity and lord of nature and their elements and natural forces as well as lord and deity of directions and environment) and samprokshanam (sprinkling of holy water as a symbolic representation of purification) rituals are performed by the temple priests. These rituals however, are not open to public. On all the three days, Sri Malayappa Swamy and His consorts are brought to a beautifully decorated Vasanta Mandapam in a procession from the main temple. In Vasanta Mandapam, Abhisekham which means Snapana Thirumanjanam (Holy Bath with aromatic ingredients) is performed to the processional deity of Lord Sri Malayappa Swamy and His consorts on first two days.