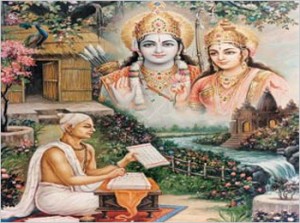 Tulsidas was a Hindu saint and the poet. He was renowned for his great devotion towards Lord Rama. Tulsidas composed several works but he is best known as the author of the epic Ramcharitmanas, a retelling of the Sanskrit Ramayana in the vernacular Awadhi language. He was acclaimed to be a reincarnation of Maharishi Valmiki, the composer of the original Ramayana in Sanskrit. He is also considered to be the composer of Hanuman Chalisa, a popular devotional hymn in Awadhi dedicated to Lord Hanuman. Tulsidas spent most of his life in Varanasi. The famous Tulsi Ghat on the Ganges River in Varanasi is named after him. The famous Sankatmochan Temple dedicated to God Hanuman is believed to be founded by Tulsidas. According to Hindu lunar calendar, Tulsidas was born on Shravana, Shukla Paksha Saptami and this day is observed as birth anniversary of Poet Tulsidas. Tulsidas is also known as Goswami Tulsidas.