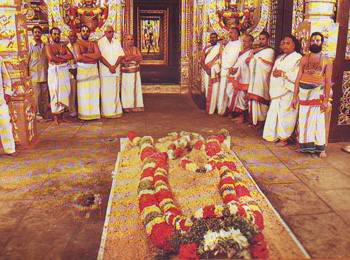 The Tiruppavada Seva, is a ritual at the Tirumala Tirupati Devastanam, in which the Mula Virat is divested of all ornaments, flowers etc. for a brief moment, with the deity clad in only a Dhoti and Uttareeyam for the period of the ritual. The ritual is particularly special because only at this point, will the Thirunaman Kaappu and Kasturi on the forehead of the deity is reduced in size offering the Netra Darshan. Otherwise the spread of the Naman, will keep the forehead and the eyes almost completely covered at any other point.

A golden vessel is placed in the Mantapam and a huge quantity of “Puliyotharai”-tamarind rice, along with other sweet preparations such as payasam, laddu, jilebi, thenthola, appam etc. are kept in it. Other ceremonial items like coconuts, flowers, sandal paste, kumkum, deepam are also placed in the vessel. These are offered as naivedya to the Lord.

While at this point, mantras are chanted and the wider Naaman is peeled off and a thin Naamam is adorned on the forehead of Mula Virat just to cover the space between His eyebrows. When this happens, it is believed that the Lord's first gaze after "opening" His Eyes (because they were covered by the Naamam earlier) should not fall on mortals: the gaze would be too strong for a mortal to withstand. So to avoid this, the mound of "Puliyotharai" is placed directly in front of the Lord. Since the mound of rice acts like a veil, the word for which in Tamil and Telugu is “ Paavada”, the ritual is called the Tiruppavada Seva.