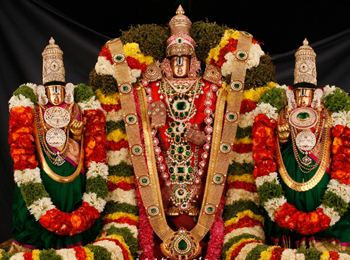 In the month of May a beautifully decked Parinayotsavam Mandapam in the Narayanagiri gardens, becomes the venue for the celestial wedding of Lord Srinivasa and Goddess Padmavathi. This grand event is called the Padmavathi Parinayam

A three - day annual festival it is performed in the evening under the moon light. In this colorful ceremony conducted on Navami, Dasami and Ekadasi in the month of Vaisakha, Sri Malayappaswami, the festival deity of Lord Venkateswara, arrives in style on Gaja, Aswa and Garuda Vahanas on each of the respective days, while Sridevi and Bhudevi arrive on separate palanquins.

'Koluvu' is held every day after the wedding in the Parinayotsava Mandapam. After the vedic hymns recitals and devotional songs, Lord Srinivasa along with Sridevi and Bhudevi return to the temple.

The wedding ceremony takes place as per the Hindu marriage traditions and much like a conventional marriage, albeit a bit grand, including some very interesting rituals. As a part of this, the Lord is seated inside the finely decorated Parinaya Mandapam, while His two consorts, sit on the opposite side.

Edurukolu(Receiving each other), (Pula Bantata) Game of Flower Balls, Vastra Dharanam(offering of new clothes) are traditionally conducted. The rituals are repeated on all the three days. Towards the end of the grand divine marriage, a tradition of bursting crackers is also absorbed and this an extra touch of pomp to the entire ceremony. On completion of the wedding ceremony Lord Malayappa swami along with Sridevi and Bhudevi are taken back to the main temple in a procession.