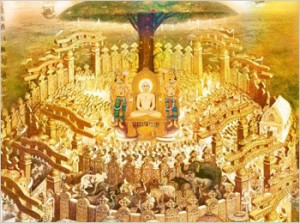 Navpad oli, a promising celebration begins from today, September 30 in this year 2014. Jains observe nine days' Ayambil (Amil) on these promising days. The principal day is devoted to Arihant Paramatma, the Dev Tatva and the primary Parameshthi.

This celebration comes twice in a year in Ashwin and in Chaitra months. One needs to do nine days' Ayambil committing previously mentioned nine virtues. One needs to do this for nine times to finish Navpad Oli. Huge quantities of individuals commit themselves to Navpad in this time. They perform Pooja, Pratikraman, Jap and other otherworldly exercises to purge soul and to dispose of all Karmik servitude. Freedom is the objective of this profound action.