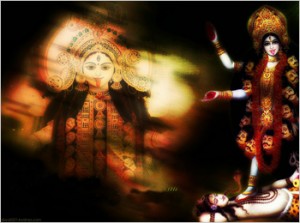 It seems that most Panchang don't make such distinction and list Kali Chaudas with Roop Chaudas and Narak Chaturdashi. Hence one has to be cautious while looking for Kali Chaudas date.

Further Kali Chaudas should not be confused with Bengal Kali Puja which is observed one day after Kali Chaudas when Amavasya Tithi prevails during midnight.