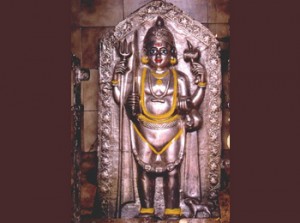 Kalashtami is observed every month during Ashtami Tithi of Krishna Paksha. Devotees of Lord Bhairav keep fast and worship Him on all Kalashtami days in the year. This is known as Kalabhairav Jayanti, falls in the month of Margashirsha according to North Indian, Purnima to Purnima, lunar month calendar while Kalabhairav Jayanti falls in the month of Kartik in South Indian, Amavasya to Amavasya, lunar month calendar. It is believed that Lord Shiva was appeared in form of Bhairav on the same day. Kalabhairav Jayanti is also known as Bhairav Ashtami. It should be noted that Kalashtami fasting might be observed on Saptami Tithi. According to religious text Vratraj Kalashtami fasting should be observed on the day when Ashtami Tithi prevails during night. Accordingly Drik Panchang makes sure that Ashtami should prevail at least for one Ghati after Pradosh while selecting fasting day for Kalashtami. Otherwise Kalashtami fasting day is moved to previous day when Ashtami Tithi is more likely to prevail during night.