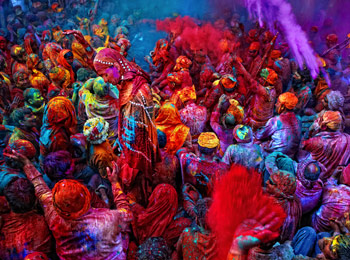 Holi is a religious celebration celebrated by Hindus everywhere throughout the world. Holi is considered as the second greatest celebration on Hindu calendar after Diwali. Holi is otherwise called a celebration of Colours. Places identified with life of Lord Krishna are known as Braj locales. Holi customs in Braj areas - Mathura, Vrindavan, Gowardhan, Gokul, Nandagaon and Barsana - are the most celebrated one. The Lathmar Holi -the conventional Holi party in Barsana is world popular.