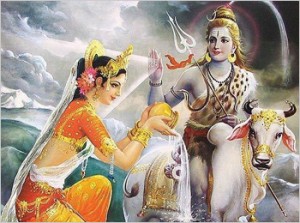 Hartalika Teej Vrat is observed during Shukla Paksha Tritiya of Bhadrapada month. On this day, makeshift statues of Lord Shiva and Goddess Parvati are made with the sand and worshipped for marital bliss and progeny.

Hartalika Teej is known by this name due to the legend associated with it. Hartalika word is combination of "Harat" and "Aalika" which means "abduction" and "female friend" respectively. According to the legend of Hartalika Teej, the friend of Goddess Parvati took her to the thick forest so that her father can't marry her to Lord Vishnu against her wish.

Hartalika Vrat is known as Gowri Habba in Karnataka, Andhra Pradesh and Tamil Nadu and it is a significant festival to get blessing of Goddess Gowri. On the day of Gowri Habba women observe Swarna Gowri Vratha to seek blessings of Goddess Gowri for happy married life.

Teej festivity is observed with much fanfare by women in North Indian states, especially in Rajasthan, Uttar Pradesh, Madhya Pradesh and Bihar. Three famous Teej(s) which are celebrated by women during Sawan and Bhadrapada months are -

Other Teej festivals like Akha Teej which is also known as Akshaya Tritiya and Gangaur Tritiya are not part of above three Teej(s). Haritalika Teej is celebrated during Shukla Paksha Tritiya of Bhadrapada month. Haritalika Teej comes one month after Hariyali Teej and most of the time celebrated one day before Ganesh Chaturthi. During Haritalika Teej women worship Lord Shiva and Goddess Parvati which are made of clay.