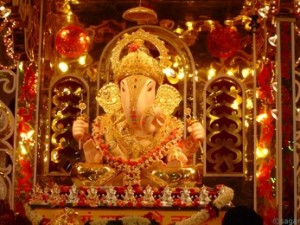 Ganesh Chaturthi marks the birth anniversary of Lord Ganesha. Lord Ganesh is worshipped as the god of wisdom, prosperity and good fortune. It is believed that he was born during the Shukla Paksha of the Bhadrapada month. Currently, Ganesh Chaturthi day falls in month of August or September in English calendar. The Ganeshotsav, the festivity of Ganesh Chaturthi, ends after 10 days on Anant Chaturdashi which is also known as Ganesh Visarjan day. On Anant Chaturdashi, devotees immerse idol of Lord Ganesh in water body after a gala street procession. Ganesh Puja is preferred during Madhyahna as it is believed that Lord Ganesh was born during Madhyahna Kala. Madhyahna Kala is equivalent to midday according to Hindu division of the day. The time duration between sunrise to sunset, according to the Hindu mode of recording time, is divided into five equal parts. These five parts are known as Pratahkala, Sangava, Madhyahna, Aparahna and Sayankal. Ganapati Sthapana and Ganapati Puja on Ganesha Chaturthi are done during Madhyahna part of the day and as per Vedic astrology it is considered the most appropriate time for Ganesha Puja.

During midday, Ganesha devotees perform detailed ritualistic Ganesha Puja which is known as Shodashopachara Ganapati Puja. It is believed that one should not sight the moon on Ganesh Chaturthi. Sighting moon on Ganesh Chaturthi creates Mithya Dosham or Mithya Kalank which means false accusation of stealing something. As per Puranic legends, Lord Krishna was falsely accused of stealing precious jewel named Syamantaka. After seeing plights of Lord Krishna, Sage Narada informed that Lord Krishna sighted moon on the day of Bhadrapada Shukla Chaturthi and because of that he has been cursed with Mithya Dosha.

Sage Narada further informed Lord Krishna that God Chandra has been cursed by Lord Ganesha that anyone who sighted moon on Shukla Chaturthi during Bhadrapada month would be cursed with Mithya Dosha and would be tainted and dishonoured in the society. On the advice of sage Narada Lord Krishna observed Ganesha Chaturthi fasting to get rid of Mithya Dosha. If anyone has mistakenly sighted the moon on Ganesha Chaturthi, he should chant following Mantra to get rid of the curse: