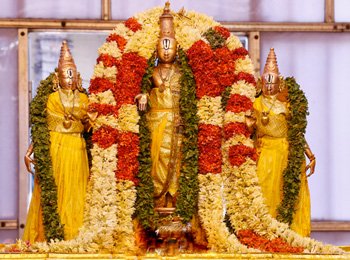 This festival is performed in the holy month of Jyestha as per Hindu almanac and the fete is completed coinciding with the Jyestha star appearing in the constellation. This festival is also called “Abhidhyeyaka Abhishekam”.

“Abhidhyeyakam” means protective shield or armour. To fight against evil, the Lord emerged with this protective armour in Kaliyuga. Since the special abhishekam (celestial bath) is conducted to this special “Armour of God”, this festival is also called Abhidhyeyaka Abhishekam. As this festival takes place in the month of Jyestha it is also known as “Jyesthabhishekam”.

As per the temple legend, this special Abhishekam, usually performed every year, is meant to protect the Utsava deities of Lord Malayappa swami and his consorts Sridevi and Bhudevi from the damage that might occur while conducting processions and Tirumanjanam (holy baths) all through the year.

The festival lasts for three days and each day after the second bell, the lord and his consorts are taken to the Kalyanotsava mandapam located in Sampangi Prakaram. Here Snapana Tirumanjanam is conducted amidst the chanting of vedic mantras.

Later the lord and his consorts are decked up in different attires (special kavachams) on each of these days. On the first day the Lord wears the Vajrakavacham (armour studded with diamonds); on the second day he wears a Muthyala kavcham (armour studded with pearls) and then on the third day, he is seen wearing a Svarna kavacham (armour of gold). It is this Svarna kavacham that remains adorning the Lord and his consorts throughout the year and only removed for Abhidhyeyaka Abhishekam in the year next.