The Legend Behind The Sudarshana Chakra

In this post, we will look into the origin of God Vishnu’s special weapon and symbol, the Sudarshana Chakra. How was God Vishnu equipped with the weapon that could destroy anything in its path? 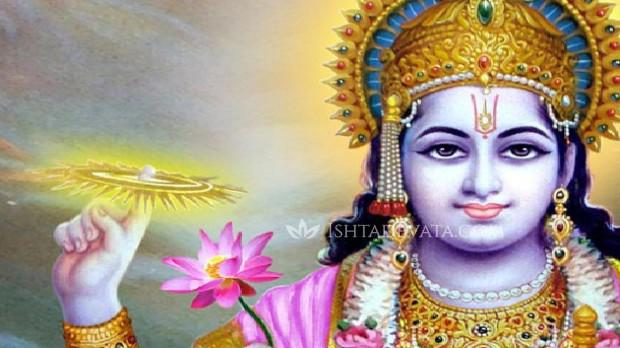 God Vishnu is the protector of the Universe and needed a powerful weapon to remove any immediate threats made against the Gods or his devotees.

With the aim to obtain a powerful weapon, God Vishnu started praying to God Shiva as he was known as the God of Ultimate destruction. Shiva was in a deep trance when God Vishnu started praying. Not wanting to wake God Shiva from his meditation, Vishnu ended up praying to Shiva for several years before he finally opened his eyes. God Shiva impressed by God Vishnu’s sincerity created the Sudarshana Chakra. It was the first of its kind weapon which could be powered by his thoughts. Shiva then linked the power of the Chakra with God Vishnu’s will, making Vishnu the bearer of one of the most powerful weapon in the universe.

Another legend behind the Sudarshana Chakra is the one with Vishwakarma, also known as the architect of gods. Vishwakarma’s daughter was married to the Sun god, but he could not go near him as it was highly difficult to endure the heat. In order to get closer, Vishwakarma reduced the intensity of the Sun, and as a result, he utilized a part of the Sun’s radiance and dust to create a celestial object, which gave birth to the Sudarshana Chakra.

The Sudharshana Chakra is rivaled only by Shiva’s trident, making both the weapons the most powerful artillery created in Hindu mythology. The Charka abides to God Vishnu’s will and could perform millions of rotations every second. It is featured with 108 serrated blades, and has the capability to travel several million yojanas (1 Yojana = 8 kms) at a blink of an eye. The Chakra possesses the greatest spiritual authority to devastate everything.

Whenever the balance of the universe is jeopardized by any Asura, God Vishnu has the capacity to behead the demon with the Sudarshana Chakra. Apart from destroying evil, the Sudarshana Chakra is associated with qualities like knowledge, stability, vision beyond the samsara and upholding the righteous.

In the Dwapara Yuga, Krishna, the Eighth Avatar of Vishnu, acquired the Sudarshana Chakra from the fire god Agni. The Sage, Parashurama, came to know of this and taught Krishna to master the weapon completely.

Click here to get information about the temples of Sudarashan Chakra,

Learn and protect yourself with – The Sudarshana Chakra Mantra.

Parashurama – The Ever Living Vishnu