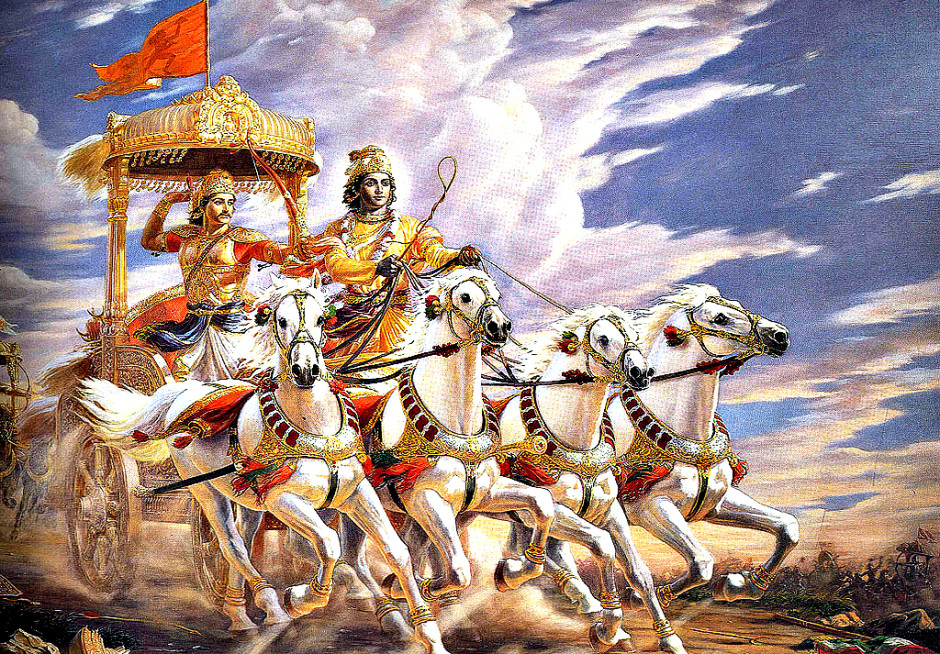 Shri Krishna, despite not fighting during the great war of Mahabharata, played one of the most influential roles that decided the outcome. Taking the side of the Pandavas, in addition to being a charioteer for Arjuna, he was seen as a philosopher, friend, guide and as a protector. And there have been several tales which reinforces Krishna’s role as a protector of the Pandavas. In this post, we will look into 4 such tales that shows how Krishna used his intelligence and mind games to aid the Pandavas.

Sage Durvasa is known for being ill-tempered and cursing people who fail to show him respect. Duryodhana, once gained a boon from Sage Durvasa for serving him well. Duryodhana capitalized this opportunity to bring more misery to the Pandavas who were in exile by requesting the Sage to pay them a visit. Duryodhana knew that the Pandavas will not be able to serve him well and as a result, face the wrath of Sage Durvasa.

The sage Durvasa complied and paid the Pandavas a visit and this meeting put Pandavas in a difficult situation as there was no food left to offer.

In this tough situation, Krishna came to the rescue of the Pandavas. He asked Draupathi for the single grain of rice remaining in the Akshaypatra. After being offered the last grain, Krishna responded by saying his hunger was satisfied.

Seeing this, Sage Durvasa and his troops felt the same which saved the Pandavas from facing the wrath of the ill-tempered sage.

Once Karna surrendered his kavach and Kundal to Indira, he was given the Shakti weapon in return, which was infallible, but could be used only once. Karna decided to use this full-proof weapon on Arjuna to kill him.

Krishna became aware of Karna’s plot and summoned Ghatotkacha, the mighty son of Bhima and ordered him to create havoc in the Kaurava’s army. Out of sheer desperation, Karna has no choice but to use the weapon on Ghatotkacha instead of Arjuna, destroying his chance to kill Arjuna.

In addition to saving Arjuna from the Shakti weapon, Krishna also saved Arjuna from Karna’s Nagastra, which had the power to kill him. When Karna shot the Nagastra, Krishna with his power applied force on the chariot with his feet, resulting in the weapon to miss Arjuna’s head and hit his crown.

Before the war began, Gandhari asked Duryodhana to appear naked in front of her so that she can make his body indestructible with the power of her sight. Krishna, who became aware of this played with Duryodhana’s mind by saying that he is no longer a kid and cannot appear completely exposed in front of his mother.

Falling prey to Krishna’s games, he decided to use a loincloth. On witnessing this, Gandhari was disappointed as she strengthened his whole body except for the covered area. Krishna who was aware of his weak spot helped Bhima defeat Duryodhana during their duel.

5 Famous Krishna Temples One Must Visit

5 Characters Who Appear In Ramayana And Mahabharata

The Pandavas’ Journey To Heaven

1 Comments on “Four Tales Of Krishna Saving The Pandavas”